For anyone hoping to find a point and click sequel to the first game, I’m thrilled they abandon it for what we got with the sequel. Finding Teddy 2 is a fun, 2D side-scrolling adventure game in a mapless MetroidVania style but with controls taken from Zelda 2. This feels so familiar, fun and fresh for every retro gamer that grew up in the 80s or 90s. There’s no nostalgia here outside of the Adventure of Link poster on the wall, Finding Teddy 2 offers an new 20 hour adventure that relies heavily on exploration, discovery, combat and traversal. Its an enjoyable experience through its entire beautiful world. From an underground river to the furthest reaches of the heavens, its well worth your time to explore. 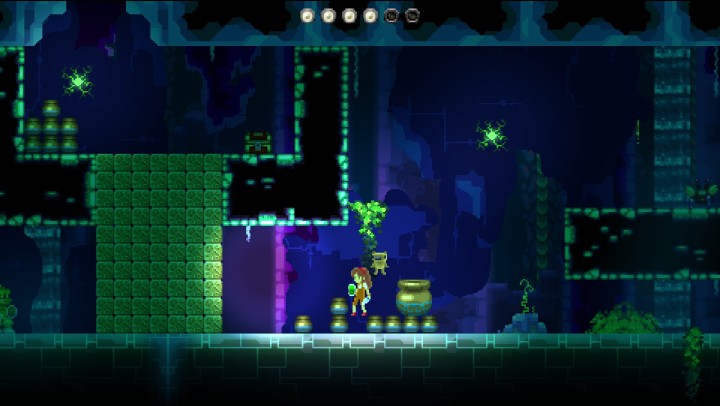 There’s so much to explore and discover. You’ll always find a subtle goal of what to do next, but to know where to go. To explore a new place, you’ll need to remember and old one. You’re never guided or hand held. You won’t ever find a map, so beware, you’ll need to make your own or just take screenshots to remember a place or something important. That’s all you need to make it easier on yourself.

You never get an explanation on why you are in this strange new world. You simply travel into your basement after a night of playing video games and you’re teleported down. The environments are beautiful and marvelously detailed with an retro pixelated look. The world has a sense of size and scope when the camera is pulled out. You’ll see your character so tiny on the screen compared to a massive guardian that’s as tall as a skyscraper. For tight corridors, the camera will zoom in tight to give a sense of cluster phobia.

Like other MetroidVania games, you’ll explore a vast foreboding world, starting with the outside and inside of a castle. Over time, you’ll gather books that will teleport you to four unique areas. You’ll visit a rugged forest, a dreary swamp, a charming winter wonderland and a happy hunting ground that hides volcanic caves within. Each of these four areas has a palace with its own theme and boss.

In each of these areas, you’ll come across towns with inhabitants that speak only in musical melodies. Each word can amount to two, three or four notes. Each word gets stored in your Lexicom so you can use them later as codes to open doors or speak to palace guardians. Its the musical melodies that make up the majority of puzzles in Finding Teddy. Since the game is about exploration and discovery, you need to find all twelve tones to your instrument from treasure chests scattered throughout the world.

As you search through the world, you’ll hear melodies over the subtle ambient music. When you perform the same melody, you’ll discover a firefly as a sort of hidden collectable that will unlock an extra far deeper in the game. You’ll need to use the same play by ear technique to unlock big golden treasure boxes in each palace with each containing a new ability to traverse the world.

You’ll find hieroglyphics in palaces that will teach you necessary melodies. You can shift ice crystals from cold to hot and vise versa. Heating them up will melt ice blocks surrounding doors, chests or even blocking paths. One quick melody can subdue flower petals that have overgrown doorways and platforms. The petals will grow back, so it turns into a timer for certain sections. The real downfall is having to use the quick melody over and over again for several flower platforms.

The game is easy to control with a 360 controller and keyboard support. You have buttons to run, play music, jump and attack. For anyone used to a whip or a gun in your MetroidVania games, you might not like how short your sword is. I didn’t find any issue with it though, because you have a lot of control over it from the start, you can downward or upward thrust enemies easily to keep you moving. You can also double tap a direction to start running, which I thought was an issue, because I’d accidentally run into something. I’d like to be able to turn off the double tap. There are vines you can easily go up or down, probably the easiest game to climb things quickly. Floors you can drop through and one way platforms to restrict as an entrance only. You can even crouch to attack or crawl through tight areas. Even walk through walls to find secret areas! If its all been done before, Finding Teddy 2 pulls it off to perfection.

There are four traversal abilities, a duck inner tube to float through water, a double jump that temporarily transforms you to an angel, a wall jump and a downward thrust that will break special blocks. The bosses of each palace require you to use your new skills. Everything from floating in the water to dodge projectiles to wall jumping in order to avoid a giant snake made of crystals. While all of the bosses are interesting, none is that difficult. Its a fun game so nothing is ever too daunting. Each ability allows you to move not only further in the castle that holds this world together, but you’ll have to back track to find other things. The further you go, the more books you’ll find to enter new areas.

Your menu has placeholders for everything that you’ll find. Items to give to people, 25 collectable items in each of the four themed areas. There are colored orbs, each one turns hollow squares into blocks that you can platform on. These orbs can also unlock colored doors. Keys will of course unlock locked doors. Each defeated boss earns you one of four colored eggs which is your ultimate goal to the final boss. Its all about finding what it takes to get you through the next door.

There is a big variety of enemies that will keep you on your toes. Even a variety of blobs become a threat. Standard yellow blobs give way to electric blobs that will hurt you if you attack them at inopportune moments. Fire blobs that leave trails of fire and then explode into flames when destroyed. Several foes have shields so you’ll need to attack from behind, above or any place you can time it right. They’re all intelligent and will block accordingly.

As you defeat enemies, you’ll collect marbles and health. The marbles are a currency that let you buy things from the world’s only store inside the castle library. There’s a brief selection of sword and defense upgrades, a health sphere, a health container that gives you more health, a ring with mysterious powers and a death diamond. While Finding Teddy 2 is a forgiving game with plenty of health, death explodes your character, including losing a lot of marbles in the process. Each death sends you back to an entry point of the area or palace. Having the death diamond resurrects you where you are with half your health bar full. A nice thing about the store is you can put a down payment on an item, so if you die, you’ll have less marbles.

For anyone looking for replay value, you can unlock a new game plus by making it through the game. It doesn’t stop there, because you keep unlocking more new game pluses. There are tons of secrets that will have you solving melody puzzles for hours as you search and listen for firefly tones. Its a wonderful game for explorers and completionists to pour time into. A fun game just to move around and beautiful to look around too.

I think the only thing holding this game back is its music is ambient. Its still good and makes an effort to sooth and relax you. The issue is it doesn’t have a big, bold, upbeat catchy soundtrack like Castlevania or Metroid. I do understand the music needs to be subtle to add to the atmosphere and ensure that you hear the melodies, but it can be a detriment to just how great this game is.

In conclusion, outside of a few issues, Finding Teddy 2 is a great game that’s well worth $15 or even $25. Its not a difficult game, its a joy to play and exactly what I was looking for. Its beautiful, immersive and even if a bit time consuming having to scour every area over and over again to use every new item or ability. I’d also like to thank Delphine of Plug In Digital for the copy.