After playing the great Mech Warrior games for PC, I thought this would be the same. Rather than being a first person perspective of an awesome metal warrior, this game is a war simulation where you are the commander of a mech platoon. Everything happens in real time all on the small screen of your GameBoy Advance.

First, you start off a mission with a hand full of labor units, which must go find natural resources, collect them and then build a home base. From there you can build more labor units to create warehouses to hold surpluses of natural resources, factories, laboratories and laser defense systems. With factories you can build the warriors of the game, mech robots, tanks and so on to destroy the enemy. After the mech robots and tanks destroy enemy robots and tanks, you can bring back the parts of the destroyed robots to the laboratories to research the parts, so that you can use the technology to make new robots. 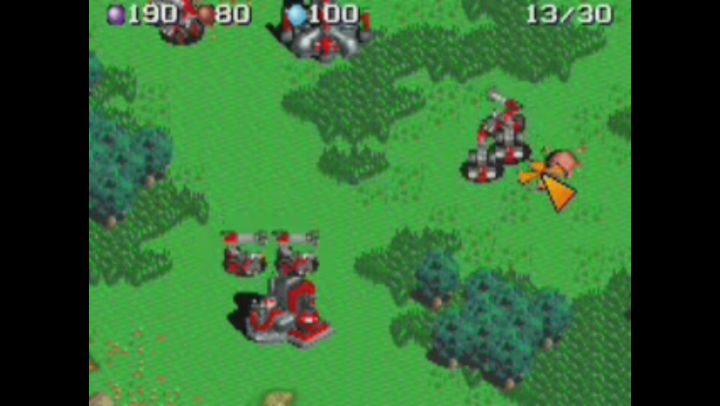 There is a nice variety of mission types, such as stopping an enemy from building a railroad, escorting supply trucks, destroying enemy defenses, defending your own base and so on. The game offers nice 3D graphics, a battery save feature, and an advanced tutorial system.

To the game’s credit, it does make things easy with big menus and controls suited for the portable system, even if its hardly the preferred choice of system to play a real time strategy. Its easy enough to select multiple units and have them go off to do something, but a mouse is just far more efficient than a cursor and the directional pad.

Where the game suffers is the computer controlled opposition can do a lot at once while you stuck with the limitations of the GameBoy Advance must do one thing at a time. With real time strategy, there is a degree of waiting and competition. You’re always competing to be the first to overwhelm the opposition.

There’s a certain amount of redundancy that turns into extreme efficiency. Resources, factories, troops and attack. Winning is almost inevitable with a large enough army. It turns into a relaxing game with times of stress when the enemy decides to overwhelm you at the wrong moments. With that being said the enemy waits for you to overwhelm them.

Each map starts the same and you gear your tactics to what the opposition does like all games of the genre. These maps are big enough to have a good distance to travel as you take over one encampment to the other. There’s a quick overview map that shows you everything and makes it easy to scroll across a lot of terrain rather than going screen to screen.

The music has a good beat, but nothing memorable outside of the game. As for the sound effects, they sound at home on the original Nintendo instead of the GameBoy Advance. While I do like the sounds of the classic system, it feels like more could have been done in this department.

You can find better games out there, but Mech Platoon is still an enjoyable experience on the go for any fan of the genre. If you have access to a better system, go for anything on those other platforms.