It has been almost 20 years since Resident Evil’s initial flesh eating zombie outbreak. Since then there has been a Director’s Cut, a Dual Shock Director’s Cut, a Sega Saturn version with added content, a Windows version with content from the Japanese version, a Nintendo DS version titled Deadly Silence, a remade version for the GameCube and even now a remastered HD version for the PC. This game has been everywhere and spun off into movies, shooting games and numerous sequels. It was the first 3D game out of the gate, so it took a foothold and ran with it.

The story is simple, an elite special forces unite crash lands their helicopter and takes refuge in a mansion… that happens to be filled with zombies! At its core, this is a third person survival horror game with a fixed camera and tank controls where up is forward, down is back, left and right are rotate. When you face off against a shambling zombie, its shoot or avoid. Most zombies take a few bullets and you do automatically lock onto them with an aim button. When aiming, you can’t move forward or backward, just aim for the head or down for ground zombies. Even if a zombie has dropped, that doesn’t mean its dead. Well it is still dead, but you know… 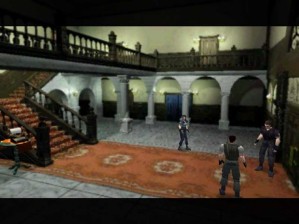 Since the game has limited ammunition, sometimes running around the foes is your best option. These zombies are slow, but so are the two playable characters Jill Valentine and Chris Redfield. Even running by a zombie is dangerous, because they will lunge at you. When they grab hold of you, its a frantic struggle to throw them off of you. Physical damage affects your speed, you’ll see the character hold their stomach, then their leg and see them hobble as they move. To replenish your health, you’ll find herbs and med kits, but they’re in a limited supply.

The game makes great use of the technology it had on the PlayStation. The fixed camera angles allowed for higher quality rendered backgrounds. The fixed camera angles work for the game, because not being able to see behind a character or object blocking your line of sight adds to the tension. So do the slow characters, awkward controls and limited resources. Its a game that demands multiple saves and retries if you save yourself with no ammo or health. The game has limited saves too. There are only so many ink ribbons for the save typewriters.

The dialog and voice acting in the cut scenes is what really stands out. Its pretty abysmal and has gone on to deserve its legendary status. In fact, I question if its the bad gameplay, the first zombies in 3D on a console or the awful voice acting that has gotten this game such acclaim and praise. Its tough to believe the voice acting could be this bad. Maybe its a technical limitation that made the voice actors pause so often.

When you begin, the game has you select one of the two characters, so there is replay value here. Jill starts off looking for Chris and Chris looks for Jill. That’s when everything goes wrong and you find your first zombie, then your second and its on. Jill has a larger inventory and can unlock doors. Chris has a smaller inventory and more health. I’d consider Jill to be an easy mode if there was one. They both have their own stories. Jill will have Barry Burton to help her and Chris will have Rebecca Chambers. Along the way, you’ll find items that help you advance further into the mansion and progress the story, but you’ll need to find out what does something where. This mansion is a labyrinth of puzzles, traps, and undead creatures.You have a map of places you’ve explored.

The zombies aren’t the only thing lurking in the mansion. There are some dangerous and hilarious bosses. Mutant plants, zombie sharks and giant spiders to name a few. Dogs outside the mansion keep you in and burst through windows when you least expect them for a jump scare. Ravens attack you on balconies. Its always a sense of dread having to deal with any enemy. Ammo vs health if you can’t dodge the enemy with such slow movement. Which do you sacrifice? If you have a fear of any specific type of animal, you’ll find them in this mansion. Bees? There is a hive her just for you. Snakes? Oh there’s not only a giant cobra, but they drop from the sky in the garden!

You don’t always have to use a pistol. There is extra firepower and more weapons scattered throughout the mansion, but like everything its just so limited. Every item, weapon, ammo and plant takes up a slot in your inventory. Because of your limited inventory, you’ll find storage containers next to the save typewriters so you can lighten your load. These containers even let you pick up your stuff at different locations.

Every once in a while you’ll need to figure out some puzzles to advance. These puzzles fit the game nicely. Everything from flipping switches under paintings to shoulder pushing around objects to make your way through. Even fitting four stones into their correct order once you collect them all.

The sparing use of music really establishes a tone and a feel for the game. It always feels uneasy. For the most part the game is devoid of music except key moments to punctuate horror and drama. Clicking clocks and clipping clops of footsteps on marble floors fill the void of music. You’ll hear zombies moaning in the background to give you a clue if they’re hiding behind a wall the camera can’t show you.

While I personally feel Resident Evil 2 and 3 are far better than this, there’s no denying this is a true classic despite all its glaring faults. The uneasy sense, the puzzles, the awkward tank controls and limited ammunition really go well together to give me that dread feeling every time I play the game.