Part of any open world game is making up your own goals, just like in life. Well after noticing just how few women there were in the game, I made it a quest. To travel to every settlement and just find all the women I could. In previous blogs I was at thirteen, well as it turns out, one that was alive was really dead and it was an illusionist posing as her. A male illusionist. I should have known with her specific chesty body type.

So it was off and my quest lead me into the southern badlands, a horrible area full of orcs and ruined towns. There was one settlement that I was interested in, an island to the west. I had tried to get there several times before, but there was a blockade of insectoids. With my super powered character, I made an attempt to get through the blockade again and again.

There were queens guarding it and now that I know what a queen looks like and how tough they are to kill, I decided it was better to just go off the road and go past them. Heck I could probably just walk past them, but I feel this murderous need to kill everything I see now that I’m so super powered. Even with super powers, I’m still no match for one queen let alone a few at once.

The reason why this settlement had always looked so desirable is because its part of a fractured main quest. I had to get something there, but could never get there. The game is full of those types of main quests, which I guess resorts to open world problem solving, if not a long term scavenger hunt with no clues.

To save time, I went around them and made my way into the settlement, which was a massive castle, probably the third or second biggest city in Two Worlds. Oh, but to make things more interesting, this was an Asian city. It felt somehow out of place in Tow Worlds, but I was very happy to have its architectural beauty, new assets and what felt like an endless sea of meaningless quests. In a game that makes you hunt for quests, this was a treasure trove.

It was also quite the harem of women. There were females everywhere! This must be where they were all hiding! In towns that are 99 – 100% men, this way maybe an 80 – 20% split between the two genders. It makes a town feel more diverse, since literally everyone in the game is just a white European, orc or gromil. Well I take that back, now there are Asians with this kingdom.

There I was, happy as a clam, running errands for the guards, criminal organization and little old ladies. People were telling me that their kingdom is safe from the orcs since its on an island. They wondered how I got past the insectoids outside. Its just a brutal area they’re in, even if its right on the border between the civil north and the orc south. Of course there are also settlements in the east where its too hot and sandy for orcs… but not dragons and humanoid jackals.

I started running up the count of women and I was somewhere at twenty-four. A lot of them even offered quests. One would give me a poem to give to someone else if I cleared her out of town house of zombies. A simple task. Well when I got back, she refused payment. I truly didn’t need that poem she had stolen from someone, but I decided to kill her. I’ve actually never killed another human in the game. No one did anything. No one reacted, the guards were not called like when I had broken into a house. There was no consequence. No one saw either, so maybe that was the reason I wasn’t being chased.

With the poem, I returned it to the man she had stolen it from only to get a petty amount of meaningless gold. Gold is useless in this game, the good stuff is found on dead orcs and bandits. In fact several times, beggars would ask for five gold and I’d think why can I give this person five-thousand gold instead? Its not like I’ve ever used it.

Quest after quest completed. I needed to decide between giving the deed to a blacksmith to a woman or her brother. The brother says their father bequeathed it to her, but he’s a blacksmith himself. What’s that woman know about the job? Well her father is the blacksmith and if your daddy does something, you’re bound to know a lot about it. It was left to her fair and square. So I sided with her and gave the deed to the mayor.

I interacted with dozens of women, all of them hated me just the same. These random females in town always seem to hate my character, but I guess he’s really a dirty and scummy dude. Probably takes weeks just to get the stench of blood off of him.

At some point, I was granted a key to their sacred temple. This sacred temple is what houses the artifact that I needed for what I call the fractal main quest. I was pretty happy, but its another example of how random this game can be to get things. I knew the artifact was in town, I knew the door was locked, just not how to get the key. There are plenty of doors and treasure chests that you can lock pick, but if its something needed for a quest, you either need the key or need to kill the guardian. 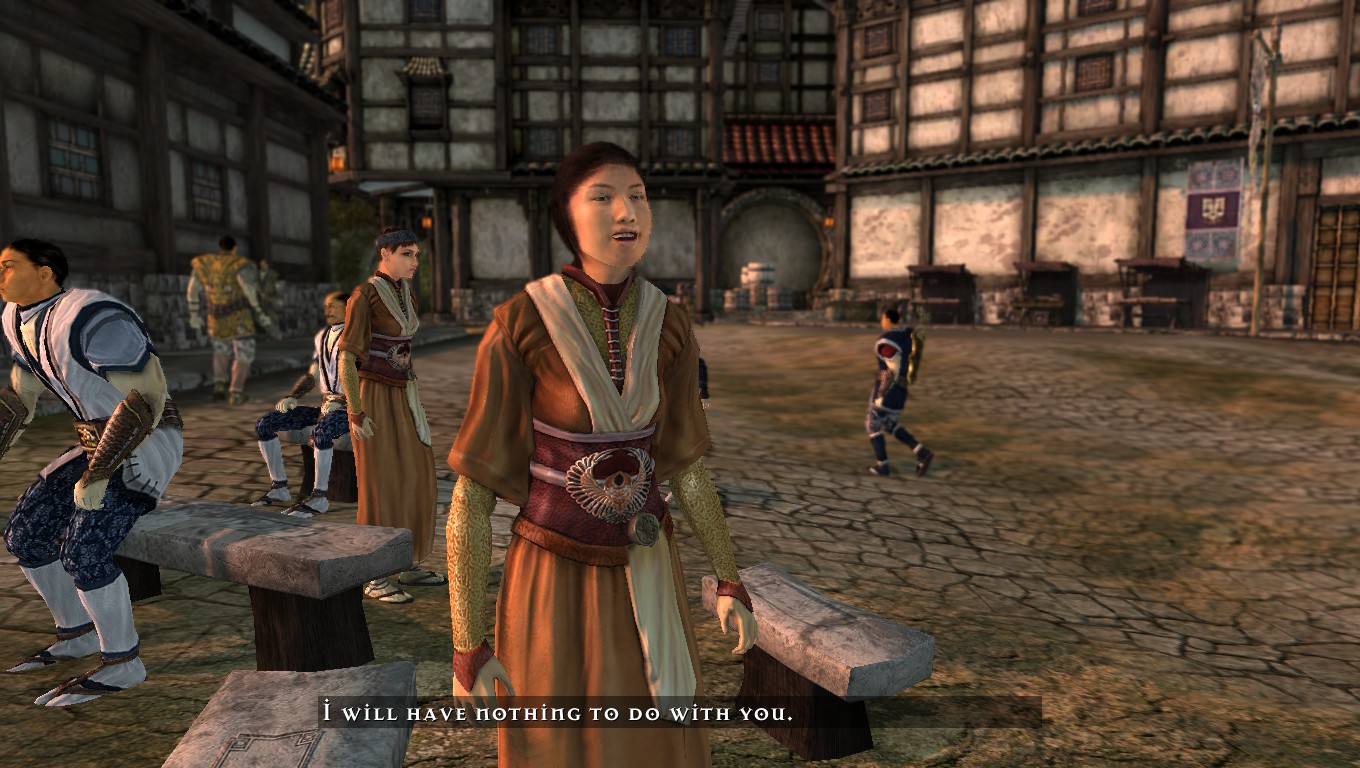 With the key, I made my way to the temple, which was interesting. In front of the temple and even in front of the kingdom itself there were all sorts of statues of snake creatures. I’ve never seen these snake creatures in Two Worlds and I was about 20 hours into the game by this point. I must have found every creature before this.

Guess who was wrong! It was me! This temple was full of sleek, evil snake creatures. They looked pretty awesome and unlike anything else in the game or even other games. These snake monsters were pretty brutal and I never actually killed one, instead I just ran around them, because that’s the best tactic in Two Worlds.

The temple was a dark maze and it took me a while to find the artifact. It was located in a room that stood out from the rest. Blue fog coming up from pits that circled the pedestal that held the artifact. I snaked my way around the narrow platforms and only fell in once where I then died and respawned. The second attempt was successful. I grabbed the artifact and the game notified me that I had failed maybe half a dozen to a dozen quests.

I figured, well the town is going to know that I stole their artifact, so I should expect to fight my way out. Well guess who was wrong again! The entire city had been slaughtered by orcs! I was pretty surprised. Sure they mentioned orcs more than enough times, but I never expected this twist of events. I was a little sad that they were all just dead and I didn’t get to see some epic battle, but that’s the style of the game. nothing other than dialog is programmed in. There are no cut scenes, so much as two mannequins talking and nothing more.

So this vast array of women and quests, were all gone. Thus resetting my count, back to 12 women still alive in the entire game of hundreds if not thousands of humans. There are probably even more orcs. That was a little devastating, I was hoping to complete the quests, but whatever, this sort of thing happens to isolated cities, no matter how tall their walls are. Even if their temples are crawling with serpents.

After that, I decided it was time to speed up the game. I was getting bored of looking for random characters to give me keys to get into places to solve these fractal quests. One of the game’s main side stories is a feud between two factions that feel like two criminal underground organizations that both have the king’s ear. This king by the way, I’ve never seen.

I’ve done tasks and chores for both, but after seeing the whole town wiped out and murdering that one woman to get a poem for worthless gold, there was no consequence. I saw on my map one of those two feuding clans had another artifact from the fractal quest. I had even seen the locked door that held it. I took it upon myself to see that clan as a priority. I did what they wanted me to do and I didn’t tip toe around it.

I marched into the rival clan’s headquarters and bluntly started killing people. I’m not writing this to tell you that I had snapped, no this is all to setup for “lucky #13.” Killing one of the clansmen set off a surge through them all. They were all after me and since I spent ten hours killing orcs for fun in the badlands, this clan all met their doom. I really wish the game let people run away from me. Well the archers run to get better vantage points, but they all died by my hands.

That’s when I found her, a maiden held captive in some sort of cage. I really wasn’t expecting that. She was behind a locked door that unlocked magically when I killed the man with the key. Her cell was still locked, so I went outside to kill more men, to rescue a single woman. I had no idea why she was in there and with all of my time spent at that base camp, I don’t remember anyone mentioning oh by the way don’t let out the prisoner.

Everyone in the camp soon fell to my katana that I had looted off one of the dead bodies at the previous city. Once there were no survivors, I went to the shack with the cell in it. Low and behold, she was gone. I have a feeling that killing the key holder released her. It seems to be Two Worlds logic to do something like that.

Since I never saw her killed, nor found a body, there she sits at lucky #13. After 24 hours of exploring, I think I’m done with Two Worlds. The number will forever stand at thirteen women are still alive in a game of hundreds if not thousands of people. As for the locked door at the other clan’s headquarters, the commander let me in with the death of his rival.