Riptide GP 2 is an excellent jet ski racing game set in a future utopia so rich that mankind can afford to setup above ground water canals that go up hill. Its a fun, enjoyable, easy to play, tough to master sort of game with unlockables, upgrades and different watercraft to buy. There’s a lot of content here and a healthy several hour campaign for a game where its longest races are a mere three minutes long.

Kudos to the developers for making a game where water crafting is a serious sport with helmets rather than the bikini clad fun fest it could have been. Even going for the watercraft genre shows a lot of talent. There are admirable animations of tricks and riders, the water physics feel good, because you’ll never have the exact same experience no matter how many times you play on the game’s thirteen circuits.

From the start of the game, you get four modes: the career, VR time trials, online multiplayer which is dead and split screen multiplayer for when you have real friends over. You are offered an optional tutorial, but the game is simple enough to understand. Use a keyboard or a 360 controller, sway your body, use your accelerator, turbo boost and perform tricks in the air to replenish your turbo meter.

The turbo boost feels quick and speedy, but its a ramping acceleration rather than a giant boost. So your best bet is to wait until that meter is full before using it. Once you use it, the turbo keeps going until you’re out.

Under normal circumstances its best to use turbo in a straight away, but with Riptide GP’s trick system, its best to use turbo going into low jump. Why low jumps? Because they’re too low to perform tricks, but if you use your turbo, then you have just enough of a window to get a trick in. If you fail a trick, you wipe out, your body rag dolls on the water and sometimes your watercraft smacks into you. There’s an easy respawn button, but it costs you time. Even if you fail the landing, you still get your turbo charged. 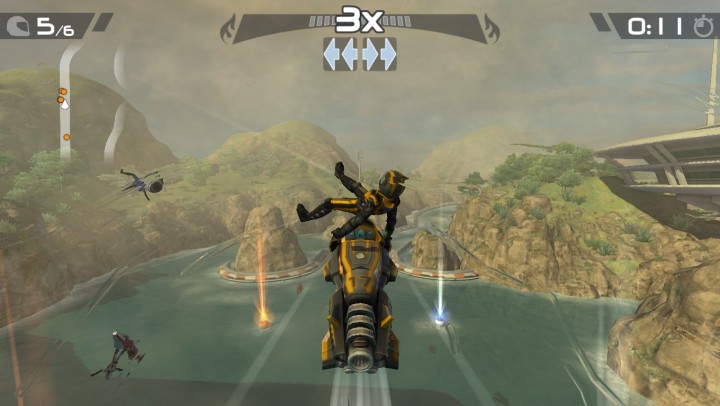 Tricks are easy to pull off on any jump from a ramp or a big wave. When you’re in the air pressing both analog sticks right, both analog sticks up, one analog stick left and the other right. While it does replenish your turbo meter, you need to diversify your tricks. Each time you use the same trick twice, you’ll get less turbo from it. Grander tricks need more air time for you to finish, but give you far more boost for your effort.

Riptide GP 2 is a game about leveling up as you earn money and experience for each event you compete in whether you win or lose. Leveling up grants you a skill point or two that you can use to unlock a new trick or ability. The abilities seem meager, things like gaining a bit more turbo from each trick and being able to perform tricks faster by a fraction of a second.

With the cash you earn, you purchase upgrades for acceleration, top speed, handling and boost. You can also purchase better watercraft and that becomes a must, because other racers will have better vehicles and you’ll be left in the dust or in this case, the spray. Another nice touch about the game is choosing your exact colors and being able to randomize those colors. While you are yourself in the game, having different colors makes it feel fresh every time you get bored of looking at the same color.

There are a diverse array of event types that can change your strategy going in. There are typical races, eliminations, and hot lap challenges, but also free styles where you score points for tricks. Finishing in the top three will grant you one or more stars. Race events are unlocked by your total number of stars so you’ll be replaying plenty of quick events.

The career spans nine championships and dozens of events while the VR time trials are solo races. The time trials make good use of ghosts and keeping track of your friend’s times. So there’s always a reason to come back and shave a few seconds off your time while competing against a ghost.

During the career, there seems to be two new courses introduced per championship, but the time trials has everything unlocked from the start. The tracks have a few different themes to tell them apart, but several courses look similar with different times of day and a variety of layouts. The two real themes seem to be rich racetrack and arctic racetrack. Some circuits are small and rely on a hairpin circle or a figure eight. If you ever find yourself going in reverse, the game reminds you of the respawn button.

While the water physics are good at making ramps, the other game physics feel a kin to the arcade. Its impossible to leap over one section of track into another. There’s no way to crash your watercraft, it just realigns you, but never seems to slow you down. The only way you can fall off is failing a trick. These little details keep you playing the game.

After going through so many other racing games this feels like it stands out for a lot of reasons. Its fun, its on water and the trick system makes it far more engaging that other methods of gaining turbo. Riptide GP 2 manages to fit a lot of content into a small mobile file size. Its perhaps the largest, best looking game for around 250 MB of file size.