Garfield Kart is a kart racing combat game that takes the vanilla mediocre route rather than a thick, fattening lasagna road less traveled. The game is fair for a bland game. Sixteen small circuits, each with big roads and generic themes like a farm, an airport, Egyptian desert and western gulch. It has eight playable drivers and you can customize a lot of things that matter when it comes to bonuses and buffs. There’s nothing to make it stand out.

With all the unlockables, route exploration, customization, depth and good weapons, this should be some sort of smash it right? It checks all those boxes so well, but there’s just something missing from it. Its missing the glitz-and-glamour of bigger, flashy kart racers. There’s nothing to keep you in the game other than your own drive to unlock everything with coins you find on the tracks.

To start, I want to point out that windowed mode has a black screen with only icons, so you’ll need to play in full screen mode. I would say its an issue of forgotten textures, but nothing other than the menus and icons are here, so its a deeper issue with the game. Another glitch I’ve come across is after a time trial or grand prix, sometimes the menus fail to appear, which means I’ve had to restart the game.

When you do get into the game, it hits another speed bump because there is no local split screen or online play. This is just you alone racing. I prefer single player myself. There are three levels of difficulty 50CC is slow, dull and super easy; so easy I found myself starting to doze and that’s no embellishment. 100 CC is the real challenge of the game, borderline tough. It feels like the only way to keep a lead is luck. There is a 150 CC for those brave enough. 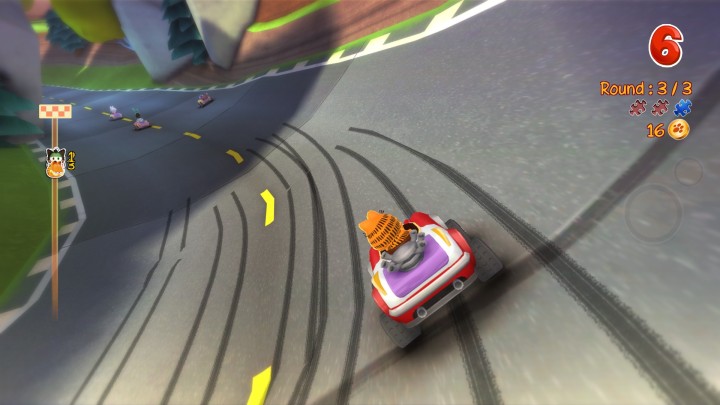 There is a variety of traditional weapons such as pies, homing pies, a magic wand, a pillow, lasagna and so on, but what do they all do? A pillow will make the other racers fall asleep. They still have full control, they’re just slower. A magic wand will exchange places with someone you shoot. Its brilliant. The diamond can be dropped or thrown, which will turn anyone that touches it into a ticking bomb and will halt nearby racers. The pie is a standard projectile weapon that can be thrown forward or dropped to be a mine. A spring can be used to jump gaps to get to higher areas or can be dropped as a trap to halt other drivers. Lasagna is a boost of speed, while perfume makes you invincible and drive faster at the same time.

The last weapon is a trio of flying saucers as a weapon that come and form a blockade ahead of the pack. These three are tough to avoid and it seems like most of the time running into one will halt your progress as they beam you up only to drop you down. Other times you can drive right through their beams. Its bizarre and feels like an annoyance to whomever is in first place. You can sometimes dodge them if you drive off road, but unless you’re on pavement, you’ll be at a snail’s pace without the proper vehicle.

To get weapons, you drive through giant candy to start the weapon roulette. You can tap the attack button to stop the roulette and end up with whatever it lands on. Sometimes you get lucky and the weapon is doubled or tripled giving you more uses. The weapons are all great weapons for any kart racer, they’re just found in all kart racers. Maybe that’s a testament to how generic Garfield is. Everything in this game was in cartoon show that I would watch as a child. The wands, the pies, the perfume and so on.

In terms of controls, the game feels button heavy even if it only uses five buttons. You have buttons to go forward, go backward, weapon forward, weapon backward and one to jump. There are no alternate camera angles like looking behind you. The game shows you who is on your six in admirable fashion, but I still would like to see behind my kart.

The jump is for a power slide. You jump, keep holding the button and steer into the turn. Then your wheels will screech and you’ll see blue sparks that turn red over a brief second. These sparks are two levels of boost. This is where the depth of the game comes into play.

I would say a kart racer like this is perfect for kids and on 50 CC its easy enough to win without performing a power slide, but on harder difficulties, this becomes mandatory. It feels a little alien and difficult to control. You can find yourself leaping and turning the wrong way. So you need to leap and stick to the direction you want no matter what. That makes the maneuver a risky proposition. Risk versus reward gameplay.

As for the racing, you can chose single race or from four grand prix with four races each. There is a time trial where you race against a UFO. Its always interesting to have something to race against even if its a time trial.

During real races, you face off against five other racers per race. They each have their own stats for boost, speed and handling, but its little consequence when weapons and bonuses play a much bigger role. Each character can be combine with a vehicle, hat and spoiler.  The vehicles have their pros and cons like the obvious trucks are good for off road to make your own shortcuts, cars are good for on road. Hats are good for weapons. A chef hat will let you throw pies like mad, a viking helmet will let you use lasagna more. Spoilers make you faster or more maneuverable. All characters in the race have a random customization of these items.

Beyond all the frills to make your racer feel like your own, you can equip boosts like a rocket to boost you off from the starting position. Second chance will let you restart a race that you’ve lost. A spring will give you a good chance of getting springs, because there are a lot of routes that require springs.

Each of the sixteen courses are closed circuit fun and there’s a mixed bag between flat courses, bumpy terrain, berms, ramps and jumps, but nothing is memorable. They could be courses from any cart racing game. Nothing screams this can only be found in a Garfield game. Is that wrong though? To just be vanilla? That’s up to you.

The majority of the roads are wide like many cart racing games to accommodate for weapon chaos. The courses have a lot of alternate routes and each one has three puzzle pieces to find and collect. Lack of achievements only hinders the game’s longevity.

I notice a lot of people complaining about a slow down, but I never encountered it, but that could be a difference of computers. Of course somehow people managed to list Garfield Kart as bullet hail, psychological horror. What I did see in the game is after earning a time trial medal, the game was supposed to send me to a menu, but instead the menu never arrived and I was just left in some limbo with no menu and no way to close the game.

Garfield Kart has been on deep discount before. Its well worth the risk to get it, even if its bland, vanilla and generic.