Spacebase DF-9 lets you create your own space station, managing crew and resources all while staving off pirates and taking hails. It sounds like a lot of fun for anyone that was into Star Trek or even games like Dungeon Keeper 2, but it turns into all of the management and none of the fun. The big issues that I have with the game is that its tough to survive the first few moments of a normal game and beyond that, its just a dull game that forces you to assimilate all metal to keep growing your station to accommodate more crew.

Your objective is to survive against first against asphyxiation and later waves of increasingly difficult raiders. Even when your crew dies and the game tells you start a new game, it still continues. It is a game over without being concrete or giving you a final score before you have to start a new game.

To start with, there’s an optional easy how to play tutorial level that will guide you through the basics without feeling forced upon you. The tutorial makes it easy to get up and running. Assign crew to the roster of jobs. Builders build when you construct rooms or objects. Miners will mine ore to be refined to get more matter to construct with. Technicians fix things and that’s about as far as the tutorial gets.

You’ll need a few things to get a space base operational. The first is power that comes in the form of reactors or a seed to start with. The second is the base itself which can be a giant room. You’ll need an oxygen recycler since you are in space after all. After your space base has O2, an enclosed room and power, there’s another matter and that’s getting in. To do this you need to setup an air lock with two airlock doors one to the interior and the other to the exterior. This room also needs to have a locker for space suits.

Outside of the tutorial the giant problem that I have with the game is the level of difficulty when you’re even getting started. The tutorial is nice and setup and it does let you continue on playing which is perhaps the best method. Consider that easy mode. You get to select your location and the game tells you how rich in ore and the frequency of attacks. Its a nice choice of difficulty without being a blunt difficulty slider. 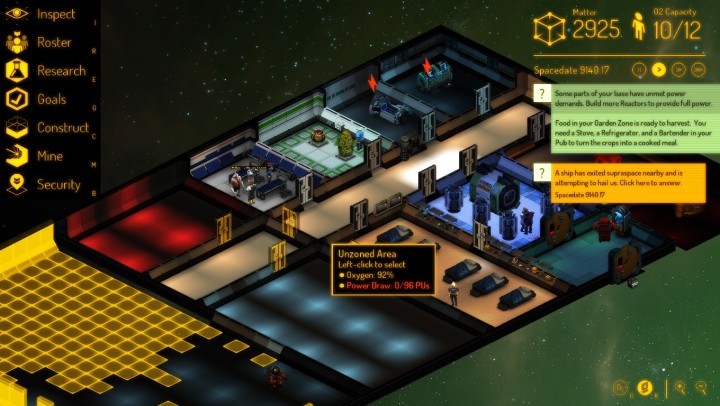 In normal play, the game starts you with a seed for power and three crew in space suits with limited oxygen. There is so much that can go wrong. Running out of matter before your crew is in oxygen will doom you. So you need to budget building a small room to house the seed, a recycler, food dispenser, and a second for the air lock. Then you need to wait for the station to fill with oxygen and even for the air lock to cycle air in and out. Your spacemen can die in their suits when waiting for an air lock to pressurize. Oh but there is another nail to get caught on and that’s the fact ore needs to be converted into matter, so it requires a matter refinery. This getting started kicks off the game and it will scare people away.

As for the design tools, they’re easy enough complete with hot keys. You click and drag out rooms along an isometric grid. You place doors from room to room and the game does a good job of assigning room categories for what you’ve placed in them. On top of what I’ve already told you there are pubs, infirmaries, research, residences, fitness, gardens and so on to add into your station.

On paper, interesting things do happen. Derelict space stations will come into your area for you to explore and spaceships will dock with you. From there you have a choice, send your security over to investigate them or ignore them. The spaceships become part of your base where then you need to claim each room, which can be tedious and cumbersome since many small rooms are just tough to click on.

You also have the choice to tear down walls and everything within the ships for matter. Once you run out of ore to mine, scrapping an entire ship becomes a necessary chore to send your builders to do. Just make sure to scrap the vessel after your security has checked it, otherwise you may kill potential crew.

People can come aboard infected with a disease and then your science station will be put to work finding the cure. To do so, click whatever science room you’ve setup and select whatever they should research. There are a number of diseases to cure and upgrades to unlock. Upgrades include things like body armor and heavier doors.

I encountered an issue where I had two matter refiners. one was outside the station where the miners could access it easy. The other was indoors and I had my builders tear it down. Well they never tore it down, so I had it deactivated. Even deactivated my miners continued to go through the air lock, walk through the station and throw the ore into the refiner. Spacebase DF-9 has its issues, but the issues never keep me from enjoying the game so much as the tedium and repetition.

You will get attacked from time to time. Raiders will float out in space and either try to shoot your miners as they pass by or they will board your station. Other times vessels will dock with your station and you’ll be invaded. The catch is, unless you’re watching a mining operation, its easy to spot and prepare for. You can have your security waiting for them, unless they’re busy putting out a fire. It seems like more of an annoyance than a fun or cool challenge. You can also purchase wall mounted defense turrets.

Normal crew will still engage the enemy if they’re in the same room, but to send crew in to fight hostiles, you’ll need to assign crew to the security. From there you can make a security beacon that draws them to the area. It feels like an extra step and even marking the point and calling off security seems like it could be streamlined. A lot of the game needs to be streamlined.

Once attackers are incapacitated you can act to cuff, uncuff or execute them. In fact you can chose to execute or cuff any of your crew. Its just a little odd. Sometimes they will even chose to join your crew. Once resources become scarce, its just easier to execute them and dump them into the refiners to make matter.

Sometimes there is an issue where a firefight in an airlock can down the only crew inside the station. So anyone outside the station is forced to suffocate over time because the air lock refuses to open when someone is in there without a suit. It gets more hilarious because in smaller stations, crew will just stand in the air lock when its too crowded everywhere else. Spacebase DF-9 is an amazing game to watch because of its logic.

Speaking of logic, I managed to glitch the game into thinking there was no airlock. Those outside the station would die of asphyxiation and those inside the station would stay in there. Even crew joining would stay outside until they died. Destroying the airlock doors and rebuilding had no effect. Yet I could manually keep a door open so the spacemen could float into my base still in their suits. They would still suffer the same fate with no oxygen. The only way I was able to get people in and out was to build a new airlock.

In terms of crew management, when it comes to the roster everyone has an emotion to specific jobs no matter what their skill level is. You can have someone great at botany, yet hates doing it. Crew member you’re the best doctor we have! Yeah but they get sad while doing it. Its a realistic and offers a level of micro management. Once you get to a point where you have crew of every class it gets easier since you no longer have people flip jobs such as having a miner one day and builder the next.

You get constant hails to answer and decide if you want them to join. It feels like a chore so I opt to avoid the calls. Sometimes the hails are to lull you into security so they can get “in your base, killing your dudes.” Their transmissions all seems sketchy. There is no one that sounds like a clear cut good or bad choice. They all sound like they’re trying to be funny and questionable, because that’s what people like in their games, humor and charm. Well both fall flat and it feels forced.

The amount of air limits how many can live in comfort aboard your station. You can always exceed your maximum. Then the reactor raises the maximum power usage you can have. Most objects need power and so do rooms in general.

Its also annoying having to press the faster speed setting, because the game will drop to normal speed whenever a yellow notice appears. It could be worse by being a popup box that you have to click like in so many other games. These warnings are things such as a crew member is starving or running out of oxygen. These warnings are color coated. Green means an overall hint on what’s needed in your station such as more self space. Yellow and brown seem to be specific crew have achieved something or need something. Major warnings like crew being attacked or raiders about to board are in yellow so they blend in. A lot of times I realize we’ve been attacked after I see the number of crew go down. Raiders look similar to your own crew.

Spacebase DF-9 is just a tough game to love when it feels like a tough start followed by dull and uninspired management. It does feel like a fleshed out game with a lot of annoyances. I think scenarios would help extend my interest, but within a few hours I feel like I’ve seen everything there is to see. With all of that said, it is still worth the one dollar I paid for it.