The Ultimate Doom takes the exceptional and timeless first person shooting classic Doom and adds a single new episode to the already three episode game. The problem with the Steam version is that it comes with an old version of DOSBox which crashes on startup. That’s probably why this game is on sale so often for as cheap as it is. Sure you can download a new version of DOSBox or even go find a great source port like GZDoom to run the game, but the fact is one of the two of them should come with this Steam version. It should work out of the box, otherwise, I can go tell you “go find a PC from the 90s and you’ll be fine playing this.” Why should there be that extra step involved? When you buy a hot dog, does the vendor tell you go across the street to cook it? What’s odd is that Doom 2 works with its DOSBox, but the Master Levels and Final Doom crash on startup.

If you really want to play the game straight out of the box, the Doom 3: BFG Edition comes with a playable version of Doom 1, Doom 2, the Master Levels for Doom 2 and more. That’s what you want to pick up. You can still use source ports, mods and .wad files for that. What if you need the Ultimate Doom? There are Doom bundles on Steam that you should look into as a cheaper alternative to purchasing just this game.

Doom lives on forever. Its a game that’s over twenty years old has been kept alive by the fans and its still going strong today with mods. I’ve played Doom over twenty years on multiple source ports with multiple .wad level packs made by the community. The source ports are engines to run the old game on modern technology. There are dozens of them, all free. I mentioned GZDoom before, and that’s the finest way to play Brutal Doom that everyone has been talking about for the past year or more. 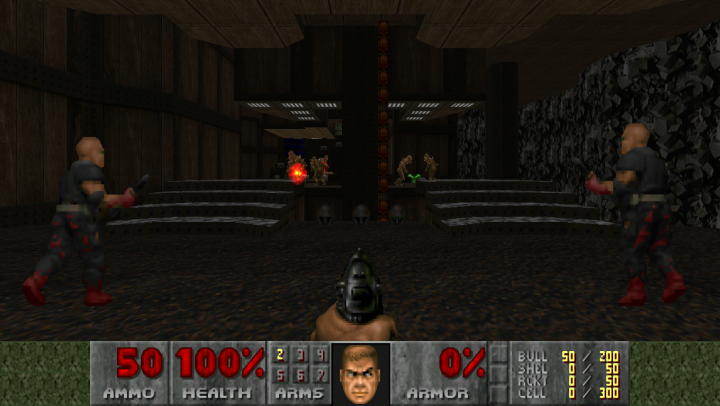 There is no story here beyond the back story that’s unavailable unless you have the instruction manual from two decades ago. Demons have invaded and its up to only you. There are a few cut scenes after each episode as a reward and a calm moment to take a breather from all the chaos.

Doom puts you down into a science fiction, demonic, almost psychotic setting on Phobos for the first episode. Then Diemos for the second,  and Hail itself for the third. Where the game becomes Ultimate Doom is that fourth challenging, tough and yet fun fourth campaign.

Although Ultimate Doom came after Doom 2, the elements of Ultimate Doom are only from the original game. There are no new weapons, enemies or anything else other than a new orange sky for the fourth episode. Its more of the same fantastic game.

So what makes Doom so fantastic? Its simplicity. You are alone, kill everything that moves. Doom is known for being unable to move your mouse up or down. If an enemy is above or below you, your character will still shoot them, but you just have no way to look down on them.

Doom’s combat is fast paced. Your character already moves fast, he can strafe and turn at a swift speed, but then he can also run to dash over small gaps. There is no jump button, why would you need one when you can dodge everything and the game is full of staircases and lifts to take you where you need to go.

Beyond fast paced action, you’ll need to flip switches, open doors and hump walls looking for secret entrances. If you ever get lost, there’s an easy to use map. There’s a lot of exploration in the game and for every eight levels per episode there’s a hidden secret level. You’ll find soul spheres, backpacks that let you double your maximum amount of ammunition. Armor will take some damage and you’ll need med kits and stim packs to restore your health.

Death will restart the level with a mere pistol, but you can save as often as you’d like. Every trap that has you falling into toxic waste, lava or something that hurts you will always have a platform to lower so you can escape. Its always a fair game like that.

At the end of each level, you’re given a time, a par time, and percentages for kills, secrets and items. Having percentages and times is a good take on a score to keep you immersed in the game. There are five levels of difficulty. The nightmare requires a lot more strategy because enemies respawn a brief time after you’ve slaughtered them.

In terms of weapons, you start with a pistol, there’s a shotgun that you can use as a sniper rifle. A chaingun that uses pistol ammunition, a plasma rifle that does more damage. Then there’s a rocket launcher that does splash damage and you can watch enemies explode into mush. To top it all off, you’ll find the BFG 9000 that uses plasma rifle’s cell ammunition, but it can wipe out a lot of enemies. Its one of the more fastening weapons. It takes a moment to fire, it has a giant slow particle that when it smashes against something it melts a large radius of enemies.

The environments diverse array of colors and areas feel different from one another. Metallic bases, rocky mountains, red glowing lava caverns, rivers of toxic waste, bodies behind bars, walls of faces and marble structures. Areas are bright, some are dark, others have flickering lights. This is a horror action game rather than a scary atmospheric romp. Just know your shotgun will keep you safe and even when you’re out of bullets you can run faster than a sports car. Who needs to run though when you have your fists and can find a chainsaw?

The enemies are a nice diverse array of creatures that ramp up as the game progresses. There is a set of two zombie soldiers, one with a pistol, the other with a shotgun. These two are more of a challenge to grant you a bit of ammunition. They still manage to be dangerous on higher difficulties, because they have hitscan weapons, meaning that if they can see you.

Larger foes like imps throw fireballs that let you dodge them before they hit you. Cacodemons hover and posture to belch lightning balls at you. Pinkie demons and spectres take a lot of damage and get in your face, but they’re still quick enough to dodge your crosshair when they’re a distance away. Lost souls dash forward and bash into you. Barons are grand versions of imps that throw plasma balls and take a lot of punishment. Beyond those enemies are two bosses that cap off the second and third episodes. A giant beast with a rocket launcher as an arm and a spider mastermind with a chaingun hitscan weapon that will keep hitting you with no cover.

The Ultimate Doom is a fantastic game, its just that it should be playable when you buy it. However, Doomers are known for digging through folders and getting programs to work. There are a lot of ways to get this to work and chances are if you’re reading this you’ve already played Doom before, so go play Doom, but play it elsewhere than this specific version.