In Doorways: The Underworld, you play as a paranormal investigator in a first person perspective on a case where two previous investigators have gone missing. Its a dark game with scarce lighting and I think I know why your predecessors went missing; neither one brought a gun for a flashlight, because you have neither. That’s only because you or your agency have the ability to jump into the mind and body of a killer and switch places. That’s just what the game tells you with a heavy tone, but the reality is you’re stuck in narrow, cluster phobic corridors with one monster at a time that will chase you.

Horror is more than just startles and a dark atmosphere; Doorways: The Underworld knows this. There are several situations beyond horror game tropes. Sure there are startling moments, but there are also moments of dread where you need to hide. Flavor texts that paint a sickening picture of limbless torsos, feces, flies and someone still managing to live in it. There is even a surgery that you can witness. The bulk of the game is still tight linear passageways with no fear of foes.

Its a dark game, but there is a punctuation of light that will get your attention at the end of hallways. Sometimes it can be tough to navigate, but the darkest parts are the briefest. The ambiance is first set in a series of underground tunnels with lights that flicker, hang and shake. You find sheets of flavor text scattered around, some of which your character will read aloud. These sheets can have codes while others are there just to horrify you. These sheets are usually over the top of a valuable item like a key or a valve that you’ll need later. Everything you can interact with glows so its easy to find in the darkness. 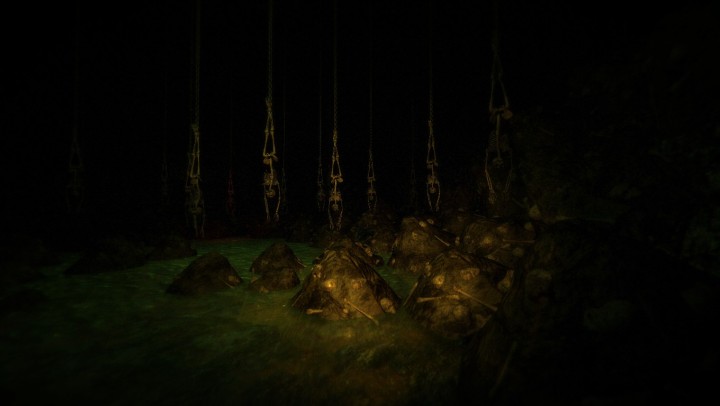 Then you’ll take the key or valve to where it needs to be, open the menu, select items or instantly open to your items, select the item, and use it on whatever is glowing. Its a bit cumbersome, but its designed to have a monster charging after you and there are only a few seconds left, will you make it? Come on! Hurry! What’s that I need to push a different button to use the item than the trigger? Smashed. You’ll get used to it.

These monsters look good and fit the atmosphere, they each have glowing eyes so you can see them better in the dark, but you’ll know when they’re around. The ground will shake, your view will tussle around and any hanging lights will shift. Its a good effect and it helps when you’re hiding, because you’ll know when they’ve left.

Your only recourse when you encounter something is to hide. Again, no guns, no slamming a gate down to save yourself. The first level’s monster encounter is more of a linear chase where you need to duck in dark corners you’ve walked by before there was no monster. You can duck behind desks and this monster will find you even when its facing away. Perhaps it can smell you.

The second monster patrols a series of tunnels and you’ll need to duck and hide in sewer pipes or let it chase you in circles. These sections feel far too long having to scour an area looking for two valves. Dodging the monster turns into a routine rather than horrifying. Each monster encounter will crescendo with a chase scene where the pressure is on to escape harm’s way. By chase scene, I mean you turn and run, even if there’s no run button in the game. In fact there’s a walk slower button.

You’ll find a helmet light at some point to guide the way, so then its odd the second monster will walk right past a shining light emitting from a sewer pipe. Other times your character chooses to turn it off in some of the worst moments such as when you’re platforming in the dark over toxic waste. The waste could be so toxic that it burns out lights, but then after the section he turns the light back on.

This section of walking on dark fences and scaffolds over green glowing waste turns into an issue. There are narrow boards you’ll need to walk across and at some point you’ll be leaping over gaps in the scaffolding’s fence floor. You can take a splash of waste, but stay in for a second or two and you’re done.

Each death reloads the last frequent checkpoint. Its an efficient load time for a game that has somewhat long loads between levels. A game that looks this good has to take time. The game looks great with dynamic lighting, but it could perform smoother. The second level seems much smoother compared to the first, but there’s no dynamic lighting like the first level.

The third level puts you in an underground bunker’s medical facility where you get the power to see other worldly things. You find a pair of human feet on a gurney and that means its time to switch your vision to see a doctor working on an unconscious man. Its good when horror games take the time to model and animate something more than a single monster. The animation is well done and someone should be proud of their efforts for a horror game. Seeing one foe fight against a crushing wall was devilish fun.

For a lot of the game, there is no map outside of what you’ll find on a wall. Much later into your journey, you’ll get a grid to make a map as you move through a maze. Its helpful, but could have been more useful earlier on.

As a paranormal investigator, its tough to say that you’re investigating anything. You’re diving through sewers, swimming through pipes and dodging monsters while you collect sheets of paper on a linear path. Its a good facade on a game that excels in a genre full of cheap uninspiring games.

I suppose the biggest issue that I have with the game is the non ending that it gives. I worked my way through a sometimes frustrating lost in the dark game, only to get capped off with “End of chapter 3. Thanks for playing!” No game thank you for showing me that behind your great graphics, you’re still just a cheap game. Games are always about the experience and the journey or fun of getting to the end.

End of review. Thanks for reading!