Bang Bang Racing is a good overhead racing game with major issues to overlook. The first issue is every time you turn your car, the chase camera swings to adjust. Its a gentle sway, but it often goes back and forth for the most minor of adjustment. It can be stomach churning, but there is always a fixed camera angle. The second issue is that an entire event can play as if its in slow motion when others are fine. Sometimes the slow motion accelerates to the smooth speed the game usually has. Even the fireworks at the end make the game slow down. I can recommend adjusting your screen resolution, but on a computer that can play ultra max settings on grander games, its just odd.

With those out of the way, I can tell you about the game itself. The game plays great with a keyboard and mouse or just a 360 controller. It plays like a lot of overhead racers, left and right to steer with a nitro boost and you have car health. If you take enough damage your car is crippled and you’ll need to crawl your way to the pit lane. You can tell a damaged car by the bellowing smoke coming out of its tailpipe. Driving through the pit near the finish line will replenish your health and nitro boost, but its out of the way and its just easier to avoid completely. Like most overhead racers you can turn on a dime and there are a number of hairpin turns on each closed circuit course. These ultra sharp turns ensure that you’ll need your brake or in this game’s case reverse. 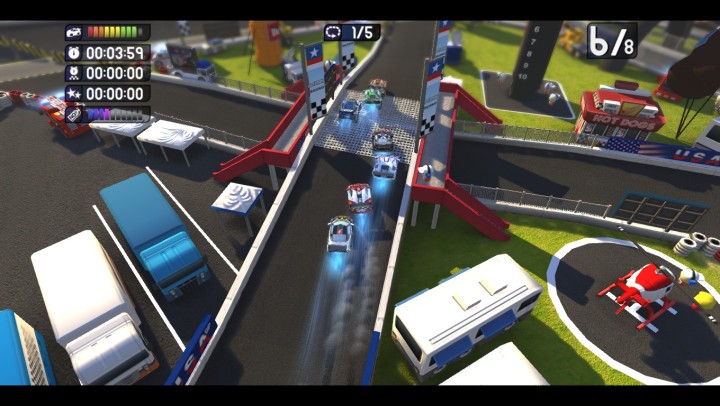 You compete against seven other racers in typical races and elimination rallies that eliminate whomever is in last place when the clock runs out. There are time trials where you race against the clock. Finishing in third place or higher will unlock the next track or two. The races are brief, several laps that take half a minute each depending on the track. Coming in first unlocks a few new vehicles for the current series.

Rather than showing stats for each car, it gives you a hint and a description for each one. I assume a steering wheel means that its good at handing or steering. The roll bar icon indicates that its durable and can take a beating. The nitro means that its better at nitro and what looks like either a tire or a fan could mean its exhaust is efficient? Perhaps it accelerates faster. I assume the speedometer means that it has a better top speed. Wait I have that backward, the speedometer is the car better at acceleration and the wheel is the one with the better engine.

The meat of the game is the career that has you competing in four brief stages that I’d call a series of events rather than stages. Each one has a minimum of five events that increase by two for each stage. With the exception of the first stage, these stages are punctuated with a final championship that has you racing in several races back to back as a sort of endurance event.

The aesthetic is nice and clean and the cars are stocky little cubes that represent race cars, stock cars and muscle cars in a sort of chibi caricature form. Speaking of chibi, there are no people in the game, just bouncing heads on bleachers to cheer you on. Its a look that several other overhead racers do and Bang Bang Racing is the cleanest. Each track is beautiful and full of color. Japanese cherry blossoms on some tracks, a crystal blue watery port on another. It just looks like a game I want to play.

Each track is compact and littered with things like cones, tires and barrels that will get in your way. The barrels are either full of water or tar, they’ll slow your car down depending what you hit. The real obstacle is your opposition, because they all cluster together and usually jam up early turns in each race. There’s no logic here, they just cram together. You can push other cars out of the way, just as you can be pushed sideways. With the cars being so stubby, its tough to turn anyone around although I have seen a few racers get stuck driving into walls.

There’s good use of stand and it will scatter onto the pavement if you drive through it. This is a nice touch of detail and it seems to affect gameplay. As you progress, you’ll find tracks with shortcuts which is another nice touch. One thing that was overlooked is the game’s snowy winter track without icy roads. It plays like every other track.

For anyone interested, there’s four player on the same game and it could make for some fun times if you have a big screen and enough friends to play it. If you’re alone, you can always play against bots and even select their difficulty. You can play through all four championship endurance races, but if you’re looking for a quick fix, there’s free play that lets you select the mode, track, class, laps and difficulty of your opposition.

Despite its two major flaws its still a fun game and a real toss up as to if it earns a recommendation. If the game slows down this bad for me, what will it do for you? Its only on a few early races, but those early races are your first impressions of the game.