eCity is a free-to-play city planning and management game with a clean aesthetic. In terms of a city builder, its relaxing, but too shallow. You’re playing more of someone that adds to a city, without dealing with its issues. It gets lost in fine details, such as managing your power grid more than anything else.

On the surface, the game looks simple, elegant and beautiful. Its style makes it stand out a humble, yet attractive. The menus are all clean, white and simple with icons and tooltips when you hover your mouse over them. Sometimes the interface can be a bit click heavy. The sub menus should stay longer than a single click. I often have to click power, then click a power station, to which the sub menu closes, then click the power menu again, before clicking the next thing. Its a big cumbersome.

With the looks out of the way, its time to get to building your city. eCity offers just under ten scenarios with small pre-built cities, but they felt dull and like an necessary tutorial. These scenarios range from the mundane like hooking up your people with the Internet to more interesting situations where your residents are in a flood plane. To do this you need to bulldoze their homes and move them to hire ground before they’re wiped out. There are other winning conditions as well such as having profit, a police station, a hospital and a specific population. Completing a scenario has no fan fare, nor is it check marked off a list.

The challenge with some of the scenarios is your inability to change the terrain, so you’re restricted to the cliffs and flat lands you have to say setup a windmill farm and power your city with clean energy. Outside of scenarios you can level terrain and sometimes destroy nearby buildings with no warning.

The big problem with these scenarios, especially the first is as much text as they have, it lets you figure out how to do things, such as when making a power grid. First you need a power plant, but then you need to convert that power down to whatever the structures can handle. Industry needs medium wires, common buildings need light wires. To convert the power you need capacitors and between the plant, capacitors and buildings, you need one of three different wires. It feels like a lot of effort to select from different wires when the sub menu keeps closing.

There are a few different power plants, such as coal and nuclear power, but the game seems to steer you toward solar farms and windmills. I say this because several of my nuclear power plants explode shortly after I place them. These explosions have no warning, they just happen.

The power grid is the most difficult to understand, but the rest of the game is self explanatory. Over each of your buildings is an icon if they’re inactive that shows you what they need. You’ll need roads and power for each structure. Beyond that, you can click on residential buildings to find out their other coverage needs, such as Internet and cell phones. Sure they need the usual things such as fire and crime production as well as hospitals and schools. These additional buildings only enhance your residences.

Unlike other games, with eCity, you plop down entire buildings rather than zoning an area for residential, commercial or industrial. So if you want skyscrapers immediately, just place them wherever you want. There are several different buildings, but there needs to be a lot more. Take for instance there are schools, but no high schools or colleges. There are only four commercial buildings, a mall, a market, a museum and a stadium.

Your citizens are quiet. There are no problems or issues. Nothing really needs to be improved and it makes the game feel shallow and easy. Pollution can be an issue, but no one says anything about it. There are treatment plants to counteract any pollination from adjacent buildings, but with no one complaining, just just keep adding. Its all on you to find your own fun. I suppose the only challenge is to keep making money, which seems to be easy in the sandbox mode. Go big or go home, plant skyscrapers and they will fill with residents. 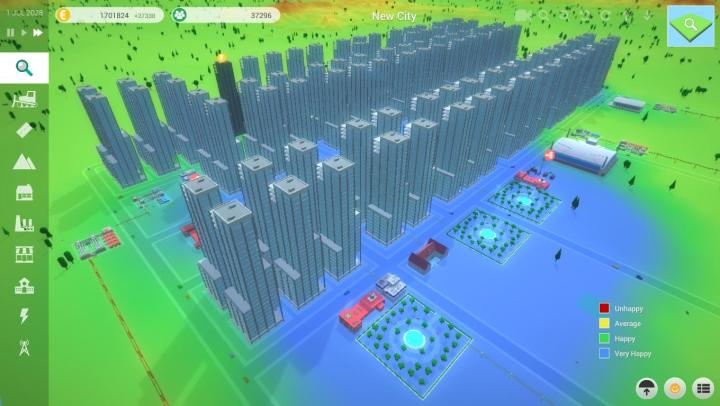 There are all sorts of charts for police protection, but there is no crime. You have a chart for fire protection, but there are no fires. Even with a population of thirty thousand, there’s no need for mass transit, even if you can place bus stations and airports. Why build industry when they pollute your environment and your residences can make you big profit?

Outside of the scenarios there is a sandbox mode where you can select how large you want your terrain and your starting cash. The randomly generated terrain looks good and you can select your plot of land, but there’s no going back to previously generated areas.

Under normal circumstances, I’d say the sandbox is the real game, but without goals, drama or consequences, it all feels hollow. Just add to your city until there are lines of skyscrapers everywhere. Everything has a cost to buy and a cost of maintaining, but it felt easy to make profit and have more money than you know what to do with.

I invested around four hours between several scenarios and the sandbox mode. I never encountered any natural disasters beyond the flood in the scenario. Perhaps they are in the game, but in a game that is missing so many things, its tough to expect anything beyond scripted problems in scenarios.

As a free game, I feel like its more of a learning experience and less of a game and that’s probably why its free. Its the start of what could be a great game. The game needs frills like mayor drama to make one day feel different than the next. Citizens have to have needs. In a game that thought to have you lay down cables for Internet and cellphone towers, they’ve forgotten to include trains and subways. Sewers and water works would be nice as well and time will tell if the game will grow or not. I hope it does, this could be a great game with this framework and clean look.