Sometimes controller support is an afterthought, so I’m forced to use third party software and when I say that, I mean Joy2Key. Its a FREE piece of software that lets you bind different keys to your controller whether its a 360 or something else. Oh and then it lets you save the profiles so you can easily select which controller profile you’d like to use. I’ve got it set to start whenever my PC hooked to my TV starts. 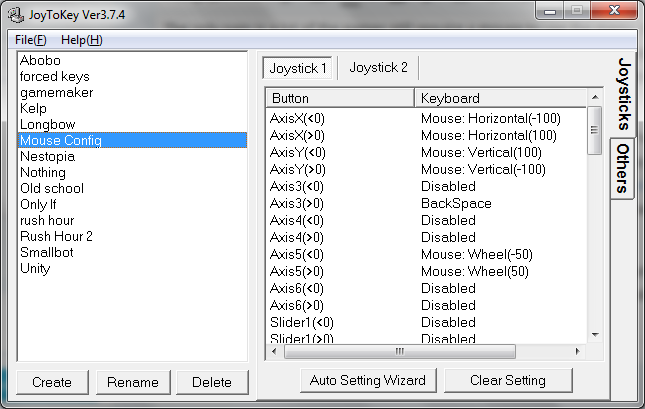 Its more than keyboard keys, its mouse movement and clicks. It helps for Unity games that have mouse look. Even a mouse wheel. The tricky part is knowing just how much to move the mouse increments and which of the controller’s axis to bind them to. I use my 360 controller as a mouse thanks to these settings. Where Steam is headed with a new controller for mouse movement, you can already do with any other controller thanks to Joy2Key.

I’ve questioned whether I should even talk about it, because this illuminates the mystery of how I can make it through games that play so awful on a keyboard. Especially when I’m lefty on a mouse and a few games don’t even have key rebindings, so I’m forced to put up with their controls. Joy2Key just makes it easier to deal with and otherwise a lot of lesser known games are so terrible, because of keyboard exclusive controls.

The only pain is a lot of the games still require a mouse to use the menu. So I’ll need to rebind a thumbstick to the mouse as well. In fact a lot of PC games that have native 360 controller support still require you to use a mouse for the menu. Even when I tell the developer, they fight me on it. Its odd that they can program a character to do anything, yet they can’t program up and down to shift active menu items.

The only downfall is that it won’t let me bind PrtScr to a key. Its odd and I’ve even found information that it can be done, yet it can’t. Its never a problem on Steam that has an overlay which allows for screenshots, but Origin, Desura and other PC games don’t allow for easy screen shooting. At least UPlay, as awful as it is has screenshots. Even then some games just have a blank white screen when I try to screen shot them. Its pretty rare, so I just end up using the developer’s own captured images.