What if I told you that you play as a man in a shark suit, defeating cavemen with a severed unicorn head that shoots rainbows? If that doesn’t get your attention, you can also wear Half-Life’s armor while carrying a gatling gun and running from a tyrannosaurus rex! Oh if that’s not enough for you, you’ll also fight a dinosaur with a rocket launcher while dressed as Futurama’s Bender, Sailor Moon or anything else you want. There’s even four player local coop and death match versus.

Commander Cool 2 is a platforming shooter that has you fighting your way through the stone age in all sorts of unlockable costumes with a variety of weapons. On paper, the game sounds like a blast and for the most part it is. There are just a few things holding it back like jumping issues, game length and how easy it is. Since this is an Early Access game, the short length is forgivable. There’s hopefully more to come and the thirty levels show enough promise and let you get a real feel for the game and what its capable of.

The easy difficulty makes it the perfect game for kids. The first twenty levels are easy, but the final ten do get challenging. In a way that’s quality game design, but in another there are so many hardcore platformers out there that forget that even easy games can be fun.

On the surface, there’s not much going on here, just a simple shooter, but then there are boulders to roll and hop on for extra height. Hop on a sleeping dinosaur’s back as a springboard. Keys to unlock switches that control moving platforms. At some point there are teleporters. With all  these goodies, I don’t feel like the game used them enough, but that could be because the game is so short. Like all platformers, you’ll find plenty of spikes that will instantly kill you.

Commander Cool 2 is a forgiving game. You can take three hits of damage before you’re dead. You have infinite lives, so death means you respawn at the beginning of the level. Defeated enemies are still gone, coins are still collected. Later levels even have checkpoint flags due to trickier jumps. Nothing too difficult though.

You’ll find plenty of guns from crates. Commander Cool starts with a boulder gun that has a short range projectile that drops to the ground. The arc is rarely put to good use. Other than that, you’ve got short range shotguns, long range crossbows, even if cavemen never had them, a chicken that fires long range eggs, a gatling gun that sprays at a quick pace. The other weapons seem to have a slow deliberate pace that forces you to aim or it’ll be another second before you can fire again. 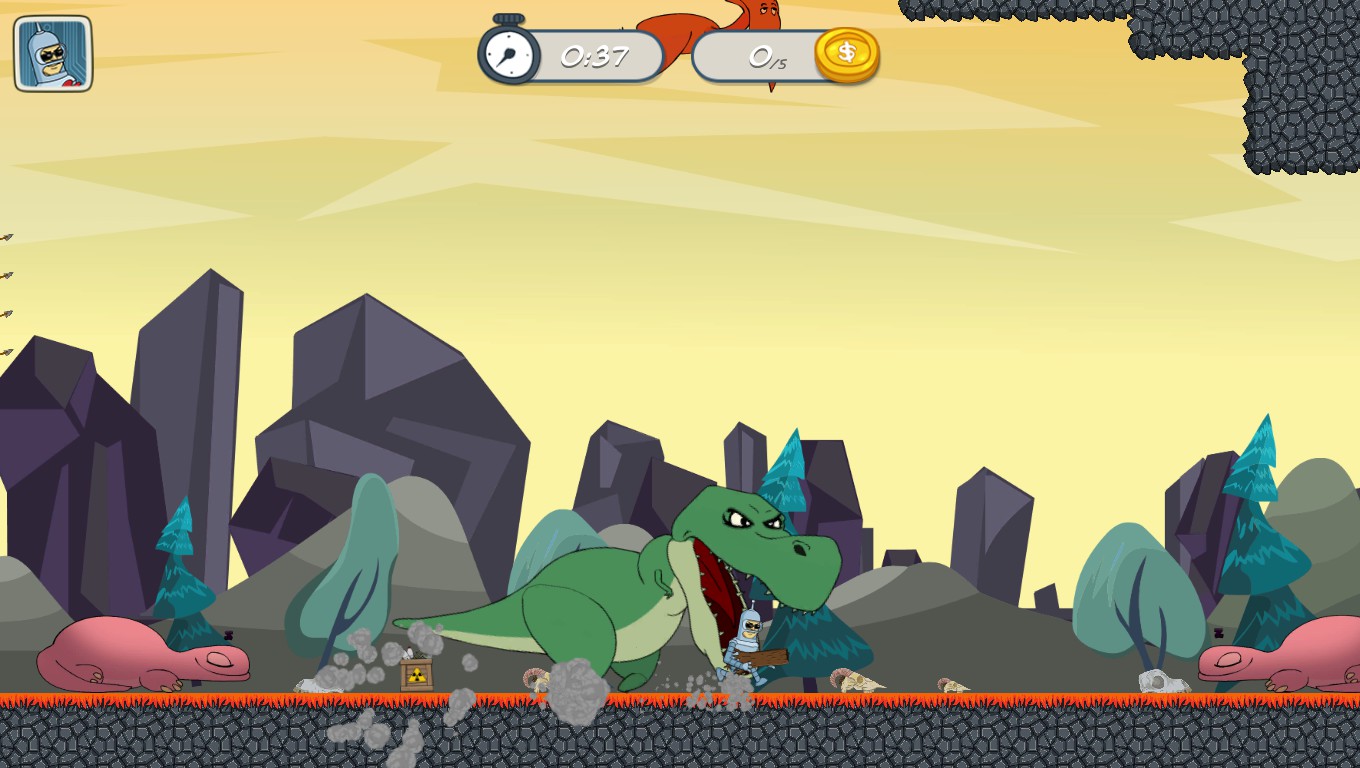 These cavemen foes are no pushovers, they can take a lot of damage, and shooting one means they’ll charge at you. Most people would run away from a slick dude wearing shades shooting at them, but these foes charge! You’ll find giant Venus fly traps, cave men that throw rocks, others that throw flaming spears and all sorts of hazards. Smashing rocks, flying spiked boulders that get dropped out of no where. It makes for some good timing sections, but its never too difficult.

The game is setup like a mobile game, you’ve got ten levels in each section of the campaign. You select a level and unlock them by completing one. At the end, you hop in your time machine and receive stars for three things: getting to the exit in under par time, never dying and collecting all of the coins. These are just meaningless goals for people that want achievements.

At every tenth level is a dinosaur chase that really helps break up the pace of the game. You’ll fly on pterodactyls, get chased by a dinosaur and even fight one. There’s no going back here, so you’ll need to quickly collect the coins or if you’re like me, you’ll miss them all and just exit the level. 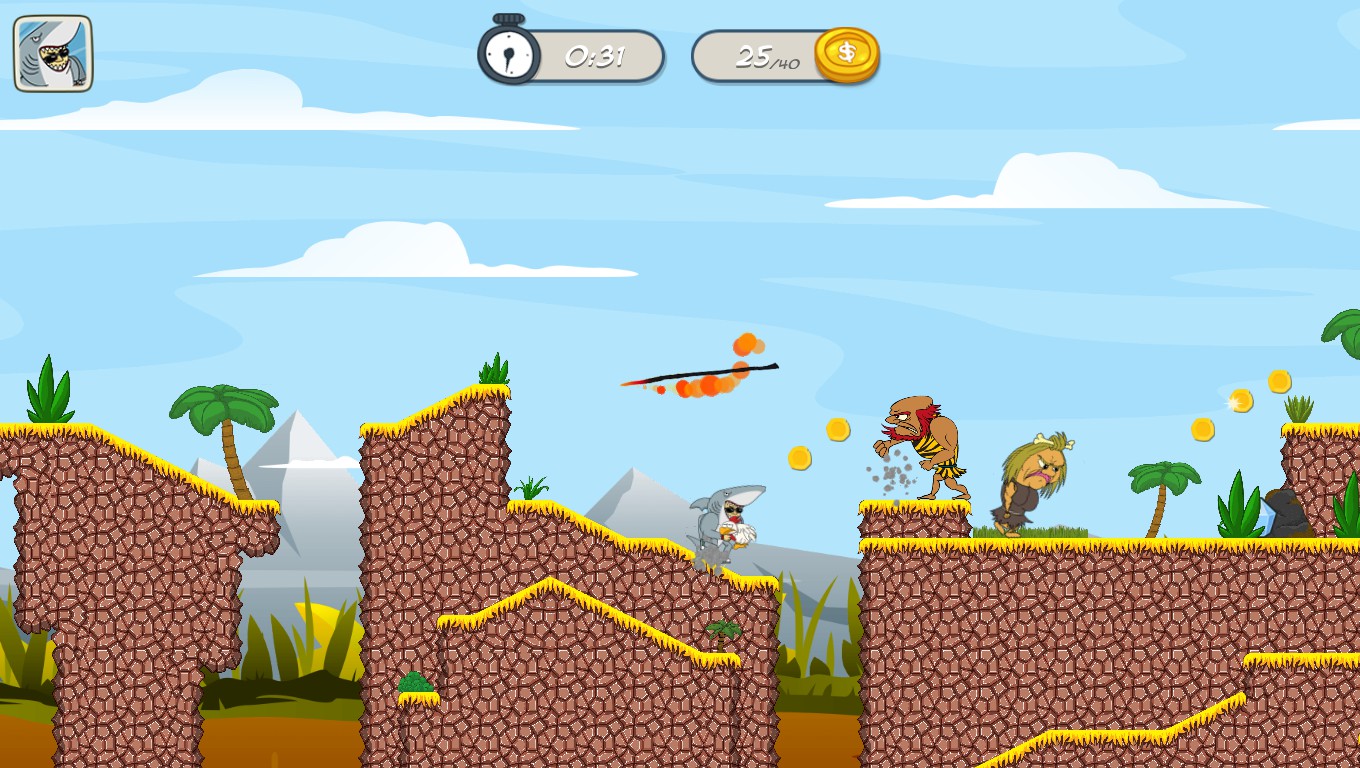 Each level has a crystal to collect in order to purchase  the costumes. These costumes are just personal preference and don’t do anything different. In four player cooperative, its a good way to tell yourself apart from everyone else. You’re bound to find something you want, even if they don’t have a license to use them and might get forced to be patched out.

There’ 360 controller support, but you’re still forced to use a mouse for the menu. Other than that there’s keyboard support. The controls are simple they could have been played on a NES controller. You have  left and right to move, one button to shoot your gun left or right, a jump and mid air double jump. Commander Cool can also wall jump, but it feels a little stiff compared to other games. You’ll need to push into the wall and jump then pull away from the wall to get distance. There’s also a button to change your costume and an action button for pulling levers. Pushing down does nothing, unless you’re on a floating platform, then you’ll automatically fall through it when other games require you to push down and jump to fall through.

With that said, the jump feels floaty, almost to gravity defying. That’s just how it is, but the major sticking point I have with the double jump is the lack of control. If you jump out once, you can’t jump back for your second jump, instead you’ll need to go out further or else you’ll drop like a stone. You’re stuck unable to move from this drop. There are vertical levels that I’ve fallen a few screens before I had control to move left or right again.

One of the only consistently difficult parts of the game are hanging rock platforms. You need to land on them precisely or you’ll be wobbling all over the place. If you fall off or hit the rocks too hard they’ll begin to swing and once they’re swinging, they’ll never stop. It just makes a tough moment far more difficult. Of course restarting the level is a good option. None of the levels are too long, most are under two minutes. There’s a good bit of exploration for the coins, but nothing that will ever take you away from the map. Every level is contained in one map.

In terms of frills, there’s a versus mode for local death matches. There are even custom maps, but no map editor in game. This can extend the game’s life, but only if the fans take to it. The developer has included a few map scraps so that you can use a third party editor to make something. These maps only have a beginning and an end with nothing in between.

The story happens in a skipable intro. A downtrodden janitor hops in a television that’s really a time machine. The corporate boss has just the man to call, Commander Cool of course who you’ll see in shades on a beach surrounded by beautiful women. He pulls off his Oculus Rift to discover that it wasn’t real. You’ll then hop into a different rust bucket of a time machine and the animated introduction ends. Normally I don’t discuss intros or stories, but this was entertaining and I missed it completely by jumping straight to the menu. 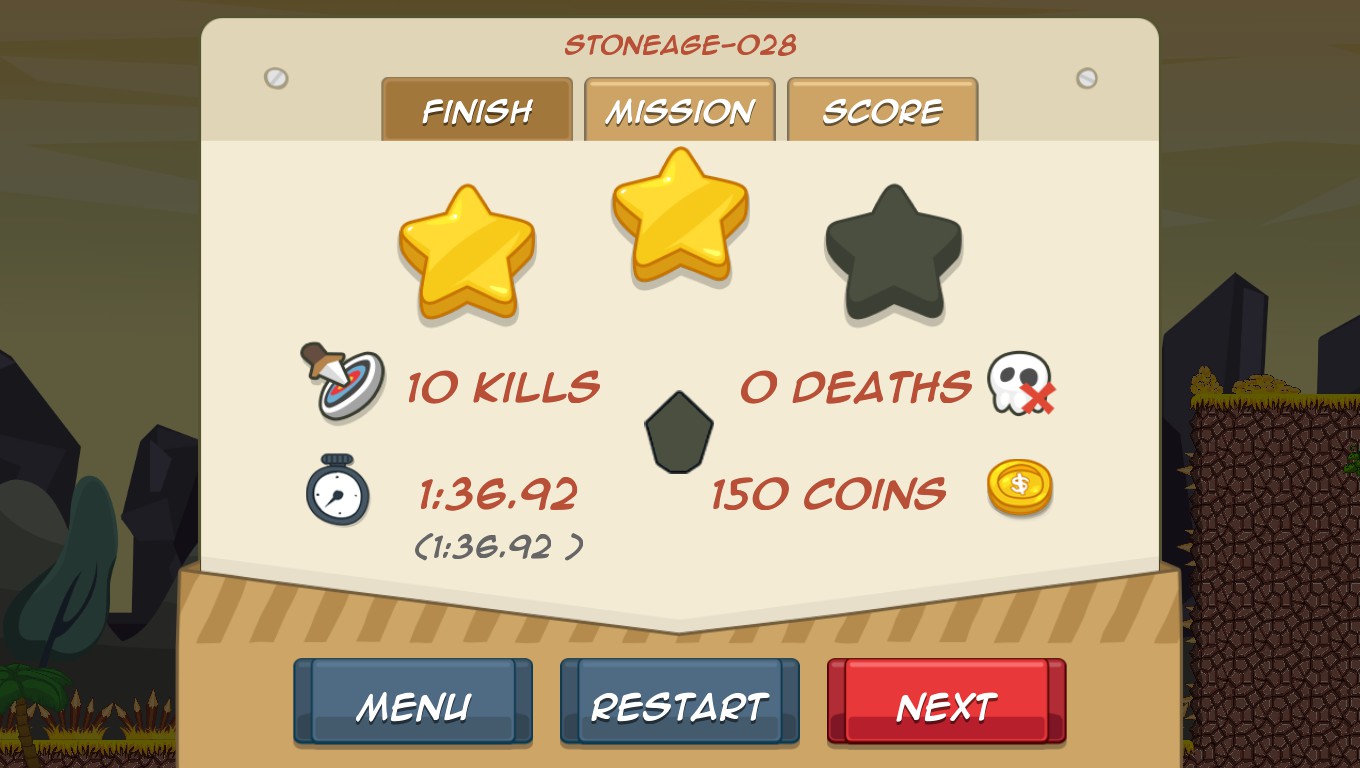 As for the animation arms swing with no elbow movement. Maybe that’s just the cavemen. As for the music, its nothing memorable or detrimental. It fits the vibe and the sound design is much better. Shotguns blasting, rockets exploding and happy joyful chimes at the end of each level.

One of the pet peeves I have is when you start the game and go to select one of the three campaigns to play, you’ll discover that the game only has one campaign. The other two are future DLC. While I have no problem with DLC or playing for an extra campaign, the last thing I want to see after I’ve bought a game is being lead to believe that I only bought one third of the game. I remember back in the days of Shareware when you got the first campaign free, but teased with everything the full game has to offer.

In the end, Commander Cool 2 isn’t a game for everyone. Its easy, imperfect and short. Its still a fun game that leaves me wanting more. I’d like to thank Christian for giving me a copy of the game. If the game didn’t have its charm and silliness I’d say avoid it. There’s just something fun about the costumes, predicaments and weapons that overcomes any jump issues.