Is it in good taste to have separate lists for male and female Mortal Kombat characters? The best is the best and everything is equal in the video game world. Thanks to programming, even a stick figure can annihilate the largest towering beast. To balance out my list of the Top 10 Femme Fatales of Mortal Kombat, someone suggested that I do a Top 10 list of males so here I am making a new list to get the visits.

In the world of Mortal Kombat, it can be difficult even determining who’s a male and well who’s a genderless robot or demon. It doesn’t matter, as long as they look like a dude, I’ll consider them.

Scorpion has almost always been the poster boy for the franchise. He’s the badass ninja specter out for revenge, well when he’s not being a bodyguard or something. While he’s one of everyone’s favorites to play as if not scream “Get Over Here!” He’s just a background character, the antagonist out for revenge that most confuse him for a protagonist. He hasn’t had that much character development, nor does he have allies or friends, but nor should he. As a specter out for revenge, he should have achieved it a long time ago and the fact that he’s still floating around makes him feel like the most badass failure there will ever be. 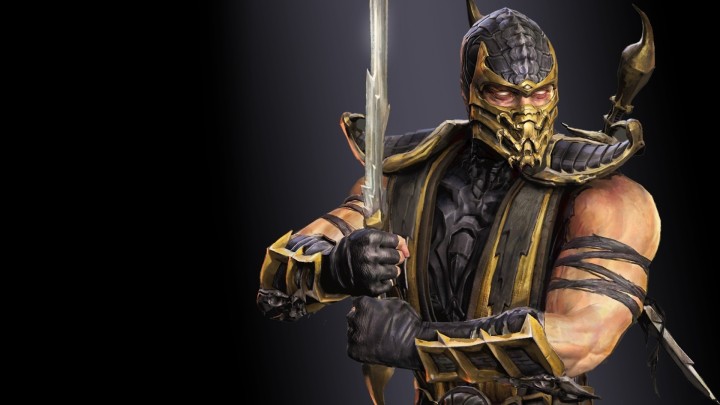 Prophet, madman, thunder god; Raiden has been reinvented quite a lot since the early nineties. Raiden has friends, foes and he’s someone that can rally characters together, so he’s always been interesting and at the forefront. His only downfall is that he’s still a god that participates in a tournament, yet its always his human protegee that takes the crown. To keep Raiden fresh and interesting, by Deception, he had even taken it upon himself to turn evil and defend humanity from itself by any means necessary. He felt watered down when Ashrah came along to share his look and a lot of his maneuvers.

The Dan of Mortal Kombat, he’s the one that’s just too cool to be there and so silly that everyone wants him to die. He’s the actor with shadow moves, a ball punch and the ability to leave an autographed photo as a friendship. His character really shines through in everything, but its his uniqueness that makes him stand out. Its not about winning a tournament, that’s just a stepping stone to being a credible actor. For anyone that’s followed the series, he’s grown in a lot of ways with great bonds between the heroic alliance of Sonya, Liu Kang and Raiden. Johnny is the fun guy that anything serious needs for levity.

Major Jackson Briggs, US Special Forces is the male version of Sonya Blande. They both have big guns and I suppose that’s always been the joke. A man that had his arms replaced with bionic ones or maybe they were there all along beneath the skin like Kano’s face. Jax is also the guy that can lift a centaur with one hand and punch him in the face. He’ll also military slam an opponent over and over. The only downside to the major is that he’s not a big player. At least he has his fight against the Red and Black Dragon and supports Sonya, but other than that he’s just a best friend and that’s still a lot more than someone like Kobra. He’s even taken part in a spin off game that really fleshed out his universe with more foes.

An everlasting sorcerer Quan Chi that has always been the underling striving for greatness. He’s one of those people that pushes someone up instead of taking the prize for himself. We all know someone like that. Mister Bad Magic has been a big part in 3D generation of games aligning himself with Shinnok and then Shang Tsung. He’s even appeared back in time to collect Shao Kahn’s amulet and release the Dragon King’s army. He stirs the pot and takes the franchise in different directions now that Kahn has been toppled. This sorcerer even has his own private Netherealm assassins. At first they were a slew of Charlie’s Angels, before they were replaced with a staple of ninjas like Scorpion and Noob-Saibot.

Oh Kano, the antagonist of many and untrusted ally of others. He’s been a leader, a follower and a bumbling idiot. This guy has always been the half-faced Terminator of the series that somehow fails to get anything done, even when he’s got a faction or an entire army behind him. The franchise keeps him interesting though as he always finds a way to weasel himself into the story somehow over and over again. I thought the best thing they could have done for him was to give him Shang Tsung’s power at the end of Deadly Alliance, but no one would find him credible. His real downfall as a playable character has been his moves aren’t unique with both Jarek and Kira in the series. Its tough to have new characters with new moves, but at least they have a connection to him. I haven’t even mentioned his connection to Sonya yet. Kira would have made a fine daughter between he and Sonya, since Kira has both of their moves.

The generic, bland protagonist of the Mortal Kombat series. The entire series supposedly revolves around him. He’s the one that defeats Shang Tsung, Shao Kahn, Shinnok and everyone else. Liu has friends, allies, mentors, foes, antagonists and a love interest in Kitana. Even starring in his own game couldn’t make him interesting. Its so amazing that he’s the hinge that holds everything together in his universe, yet players don’t care about him. He’ll always be the easiest guy to play as…. forward, forward this! forward, forward that! The best thing that happened to him was his death. Liu Kang has always been in the main series of games, even if Deadly Alliance only killed him. It was beautiful to see his return as a ghoul with chains. The change was the first thing to make him interesting in a decade.

Who can top the protagonist of the first four games? Its the villain. Logically Shang Tsung should be the one that tops them all, since he can turn into anyone he wants. He’s been the focus of several games in the main series, as well as the boss of two games. Another thing that makes him so interesting as a character is that he rapidly ages, unless he consumes souls. He’s not really human, he’s a demon that has lived long before Kahn was in power and will live long after. He’s had foes, underlings and masters. He’s loved, aligned, and created characters from his magic, Shang Tsung can do anything and that’s what keeps him interesting. The possibilities are endless, he is a golden ticket to do anything and say “because sorcery.”

Emperor, conqueror, warlord, husband, father and antagonist to them all. How couldn’t Shao Kahn be one of the most interesting men in Mortal Kombat? He’s ruled worlds, merged some together and even come up with crazy plots of burring his wife in another dimension, so he can conquer it. Shao Kahn has used his step daughter as an assassin, cloned her and dominated two games as one of the toughest bosses if not a third with Shaolin Monks. He’s had entire factions working for him, even armies and enslaved people. Of course on the flip side he’s had agencies made to defend against his tierney and caused inter-dimensional wars. He’s what brought fighting games from a simple beat the boss to a save the universe sort of thing all while having friends, allies and stomping your nemesis. One thing that Kahn has been that no one on this list can claim is an announcer, “Flawless Victory.”

The one man that has been alive throughout every game is Sub-Zero. Liu Kang was killed, but Sub-Zero is the only man to have been killed, have it be his brother, get unmasked only to take over his clan as grand master. Sub-Zero is one of those guys that has done it all. He’s the Batman of Mortal Kombat, the one guy holding it all together. This member of the Lin Kuei separate from the hero faction, he’s been an antagonist, protagonist, hunted and even mentored. He’s got a clan, friends, underlings, allies, a sadistic boss, foes, villains, antagonists, mystical powers and a game of his own. Somehow he’s from Japan, but born in Outworld. Oh none of that matters. He’s always been great to play as. he’s turned from a pallet swapped ninja into someone special. Even when hiding in the shadows, he manages to be an absolute stand out in a series full of great characters.