Brutal Legend is an open world hack n’ slash staring Jack Black as Eddie Riggs, set in a fantasy world of a heavy metal album cover come to life. I felt captivated by the story from start to finish, more than I enjoyed the game and its pretty rare for me to say such a thing. As a game, the combat was just there, other games do it better, but nothing does the unique atmosphere better than Brutal Legend.

The story is simple, you’re a downtrodden roadie working for an ungrateful emo band that costs you your life. From there, you’re transported to a fantastic land made of metal and stone. Where mammoths have chrome tusks and spiders made of steel. Its a fresh take on any fantasy world. Nighttime turns into a gorgeous meteorological phenomenon, either with electric blue moons or asteroid showers. The land is getting oppressed by a demon lord and you need to band together, gather troops and lead an uprising to defeat him! 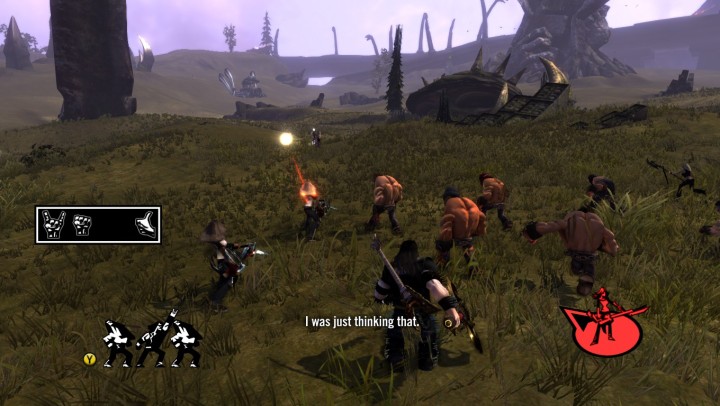 The characters are straight out of the late 70s early 80s heavy metal scene. Everyone is wearing spikes and black. Men have big muscles, washboard abs, long flowing hair and the ladies are always petite with enough mascara to blot out the sun. All the characters have big eyes and I think that helps them convey emotion much better. Its a wonderfully acted game, from the voice acting to the animations.

There’s a lot of humor, charm and goofiness that I enjoyed. I’m not one that likes comedy in games, but it hit the mark for me. Its not all comedy, the game takes itself serious when it has to be. The cameos also helped. Seeing Lemmy from Motorhead as my healer throughout the game. Having Ozzy Osbourne upgrade my car’s weapons was a lot of fun. Tim Curry as the supreme villain. With all the famous voices incredible performances, there were plenty of great lesser known talent doing a fantastic job voice acting. All the characters no matter how big or small all have personality and charm, even if none of them have last names.

Halfway through the game, the emo starts to bleed into this world of metal and the new characters are all gothed up. Crazy haired “kids” with striped shirts, Victorian dressed women in white dresses carrying umbrellas. While they feel more Tim Burton than heavy metal, they’re still beautiful as villains. What 80s metal head doesn’t want to axe crimson clad, metal teethed nurses?

For a hack n’ slash, its pretty simple, you’ve got an axe to melee, and another axe for magic. You can use the latter to perform guitar solos that you’ll unlock different songs at shrines. These solos go in a mini game that’s like a quick, horizontal Guitar Hero. Since you’re leading an uprising, you’ll be commanding troops and its easy enough. One button to have them follow you, another to stay, another to attack a highlighted object and one to attack what’s in front of you. I think this adds a sort of uniqueness to the game. You’ll rarely be fighting alone, you’ve always got a crew with you.

One of the first things you do is liberate headbanger grunts with giant necks. Then get ranged laser weapons for the razer girls from “General Lionwhyte’s pleasure tower.” The names alone play up what the game is going for. That era when fantasies were cool, imaginative, 80s, death, skulls and weren’t dominated by elves or magic. In this world, the guitar is magic. Your solos can melt faces, heal your companions and summon vehicles.

There are double team maneuvers with allies that can keep things interesting. You’re forced to ride giant speakers, getting carried by roadies to keep away flocks of seagulls. Ride on the back of a Lemmy’s motorcycle to stun enemies. Headbang with your grunts. Another mission has you trying to circle a Kiss beast in a ring of fire. While I can’t say it was fun, it still switched up the game play.

Eddie can’t jump or even run, you’ll need to hop into your classic, customizable hotrod named Deuce. There are mandatory driving segments here and there throughout the game to keep the game play diverse, but when you’re outside of a mission, you don’t have to use it, but its far better than walking. I just wish the driving was better. The steering in particular. Its not a bad in earlier parts in the game or when you’re in the big open world, but later on, some of the mandatory segments are just painful to play. You’re in a car, essentially off roading with trees everywhere, the slightest turn can send you off course into a tree. Some of the segments are pretty narrow and start to drag the game down.

Nothing drags the game down more than when Eddie Riggs sprouts wings and it becomes what most people call a real time strategy, but I call it a MOBA. Its a struggle, you as their champion sprout wings and command your army against an opponent commanding theirs. This is a lot different than just hacking n’ slashing with troops at your side. You can fly and even still drop down to the ground to fight or perform guitar solos to buff your troops. You need to buy the troops with fans. Both champions have a stage or a gateway as their home base and you buy troops with fans. You get fans by performing a metal solo atop of a fan stream where a tower of a merchandise booth is then built over top of it. Its okay once you get the hang of it. I feel like this was a tacked on multiplayer facet of the game. I can’t imagine some 80s metal head getting through these segments, but there’s always an easy difficulty.

The more booths you have, the more funds get generated to buy troops. In this particular arena, there are six fan streams. Two by each stage, and one in each of two equal paths. So the arena is in a circle and that’s fine too. Now these troops have specific talents, like a rock, paper, scissors sort of thing. Roadies take out buildings like merchandise booths and stages. Bouncers take out mounted enemies like those on horses and steel horses. Its easy to understand with the descriptions.

I’d say these MOBA / RTS are 5% of the game and they’re just there for diversity. Plus you can’t lead an uprising without having your army fight another can you? With that said, I grew to hate these painful battles. I’m no fan of MOBAs, but these just felt like a chore of a tug of war. I’d take a tower over there, but lose a tower. These battles took far too long. Death in the MOBAs merely respawns you. Outside of the battles, death sends you back to the previous checkpoint, which might have been a while ago.

A lot of love went into making this game. Well love and money. It feels like no expense spared getting the big names, making an incredible, immersive world with fantastic art design. There are little details that really make it an unforgettable experience. Even Jack Black performing a live action introduction of him finding the menu in a record jacket.

There are details in game like the wildlife. Porcupines, giant horned elk stampeding down a mountain and the ability to run them all down with your car. If not use your car’s flame thrower to incinerate them. Hey this is an open world game that lets you be in control. You’ll find plenty of side missions, but I didn’t tackle any of them until after the main story was over and done with.

While its not a home run for its game play or in game fun, but its so good because of its art style, story and portrayal of these characters that the incredible soundtrack is almost an afterthought for me. Its there on missions with you, and in a cassette deck of the Deuce, but I was paying attention to the character’s delivery that I found myself tuning out the heavy metal. I never thought I’d pay attention to Jack Black.