With all of the hoopla over Brutal Doom, Brutal Half-Life and even Brutal Mario, I decided its time to finally play Brutal Legend. I’ve really enjoyed the first two hours or so. Even when the game opens up into a sort of faction versus faction sort of thing, I still had no problem with it. The whole factions game play seems like Grand Theft Auto: San Andreas so far, but maybe later it’ll be different.

There’s a good mix of hack and slash with driving here and there. Neither of which feels amazing to play, but it seems like I’m playing for the story, which I’ve never said about any game.  The hack and slash handles just fine. The vehicle segments could be better and it just doesn’t feel right when I steer. Like the twitch of a thumb stick really shifts the car more than I’d like. I say shift instead of turn. I thought maybe its a beast on my processor, so I should turn down the graphics settings and its still the same.

Before the mission I’m about to tell you about, I had to get my classic goth metal roadster to the nearest relic garage, where Ozzy Osbourne himself added weapons. I had to get forward machine guns and I chose to get side flames as a secondary weapon. It seemed cool enough to light enemies on fire.

Everything has felt easy enough even on medium difficulty. I’ve rarely died, but that’s until I was to escort a giant tour bus. This bus is so giant that the wheels are attached to its side, so it can go off roading. So what’s the first thing my character says? Its a new tour bus, we’re not going off roading with it.

Five seconds later, we’re attacked by motorcycle monkeys. That’s the best way I can describe them. Maniacs riding heavy metal motorcycles that attack by throwing skulls with a green hue. You can clearly see the skulls arc in the air and hit the tour bust.

It was okay at first. I’d just shoot the maniacs or light them on fire. Soon enough, they had damaged the bus so bad that it exploded. I saw the concern on the character’s face as he listened over a Wallie-talkie to the bust driver yelling Fire! Fire! So hot… I had failed the mission for the first time. That was fine. Its bound to happen.

Then the second time, and the third. Every attempt took three to five minutes. Each failure meant that I had to listen to the manager and see the concern on my character’s face. Its some really good animation that really conveys a certain subtlety this all of his new friends have just died.

As I kept playing, over and over again, the flaws kept becoming more evident. There were certain logic flaws, such as how the bus could make so many 90 degree turns. I could never really keep up with the bus, even using my nitro. It was a struggle to overtake the bus to get in front of it, but I soon realized that the best place was behind the vehicle. Enemies attack from the front, sides and behind it, but I couldn’t effectively destroy vehicles in front. I needed to stay behind.

Not just behind the bus, there was a sweet spot. If you’re too close to the bus, the enemies can stay behind you and throw their skulls. I kept having to release the throttle so the bikes could overtake me. The problem with that is, sometimes they’d ram me and send me spinning. I’d need to correct my course. Sometimes I’d get knocked into a tree where its a pain to maneuver around the tree to get back onto the course. I’d also be susceptible to getting hit by another cycle as it drives by. 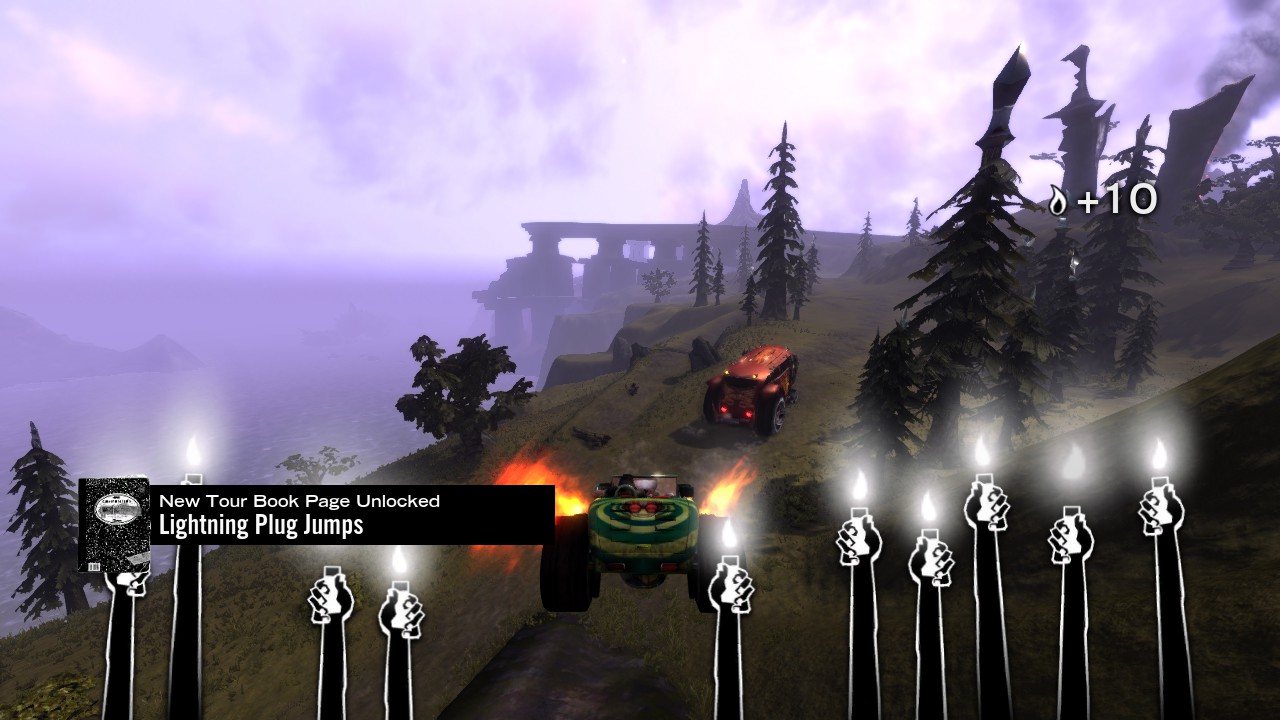 I tried to make use of my secondary weapon, the flames that roared out of the side of my roadster. Wow that was an ineffective strategy. Its as if there was a delay or a warm up to the weapon. Every time I’d use the weapon, I’d need to hold the button. It was very ineffective. I’d never get the timing just right. So I fell into a pattern of having the flames blazing when there was no one to shoot at, because you can’t shoot and use the flames at the same time.

It was more than that. These cycles would come in from strange angles, and after an hour I realized that I’d need to go off roading in this car to follow the motorcycles as they spawn in. I’d follow them with guns blacing to destroy them efficiently, before they hurt the bus too bad. So escorting the bus, I had to not escort the bus.

I watched the world go from day to night several times. It also seemed like night was the worst. Sometimes the bikes would have tail lights so I could see them, other times they didn’t. Perhaps its because I had shot them out. I dreaded the night. Not to mention the rain. Some nights would have cool meteorological effects like a giant electrical moon or a meteor shower. Its definitely an interesting aspect of the game.

Since my secondary weapon wasn’t working, I just decided that I was going to hold down the machine gun button and follow the routes that the cycles spawn in from. The first try wasn’t successful, but the second one made it all the way to the finish. Thus ending two hours for what was a five minute mission.

To top that off, its always the same song. Even though I’m in the car, its for a mission and I was stuck with the same song over and over for two full hours. Well that and listening to the driver burn alive. I can only hope that nothing will be as needlessly difficult as that mission.