I managed to hit my 500th WordPress article this week, but posting 13 years worth of lazy reviews helped that number. I also think that my stats have just about bottomed out. Ever since switching back to the default WordPress template, the stats have really been dwindling. The stats have been going down for the past two weeks.

It seems like WordPress has solved some sort of “double hits” problem that I’ve always seen. It just feels like one visitor can account for two hits. Well now it looks like its fixed.

Work was a beast this week, and I had to learn an awful new proprietary programming language yet I still managed a review every day and not even the easy retro reviews!

Wow this game just wasn’t fun at all. Its just a really boring and dull mobile looking game. I just found nothing redeemable with this game. It could have been fun. Collecting cows and farm animals, then taking them up to your mother ship while dodging airplanes and satellites. Nope it was just unusually dull, uneventful and difficult. I played it for two hours until I just couldn’t anymore. The visual style wasn’t keeping me in the game and it was just time to move on.

It was a toss up between this and FET as my worst game of the week. I’ve tried to play Only If last summer. I tried playing it twice, but my initial problem with it was the awful programming. If a Unity3D game can’t have my rebound keys work in the game, why should I care enough to play? Its a function of the engine, so why don’t you have it? Anyway, one of my Steam friends wanted me to play it. So I did…. for two hours. Its just vague, cryptic, death heavy and not fun. Oh but wait, the reason why its such a good ending is because of the incest ending. Its in a Youtube video therefore it must be true. Its really tacked on, forced and almost implausible from the three characters in the game. I play games for the fun and this just wasn’t fun, so I don’t care about the story or the antagonist yelling into a microphone for two hours.

There’s nothing wrong with the game, its just very tap heavy. Tap tap tap. I managed to find errors that should have been fixed years ago. No one cares. I reported them on the Desura page, but again no one cares. You bought the game for however much money. Its got a lot of modes, but overall, the game just isn’t fun so much as its easy. I think its a good game for toddlers, but the fact that there’s mutant fish throws me off. Something beautiful might be better for kids. So I’m just left with wondering who’s the demographic for this?

I was pretty surprised this game got a lot of views. Its a true classic, but its just interesting to see the views. It was a giant pain playing it and I did for a good eight hours…. in a row. I was just as surprised at that as you are. It must be a good game if I can play for eight hours in one sitting. I still don’t even think its a good game. Its not a bad game, its just a pain that relies a lot on skill and precision and the collision detection just wasn’t that precise.

Because Gradius got a lot of views, I decided to review Life Force. I’ve never played this game outside of the arcade. In fact I think the version in the arcade that I played was the NES version. My arcade was always good for that. Well its cheap. Life Force is one cheap game that relies on memorization more than actual skill. Oh you still need skill here and there, but memorizing where enemies will jump out will surely help. I think Life Force is a better game than Gradius, just don’t tell anyone that, because Gradius is the classic.

Oh I always enjoy FTL, I’ve got 120 hours on Steam and however many hundreds on GOG. I managed to play almost through the entire game on medium difficulty. Then I ran out of fuel and I was picked to death. Ships would come to my distress beacon and I’d try to kill them, but at some point the two ships would always jump away. The third ship was the one that did me in and I saw it coming. It was my furthest play through on medium and now I’m getting more accustom to the challenges of medium. This time I had a lot of things going for my Kestrel C ship. Things like a full crew, two mantis to teleport over and even mind control. 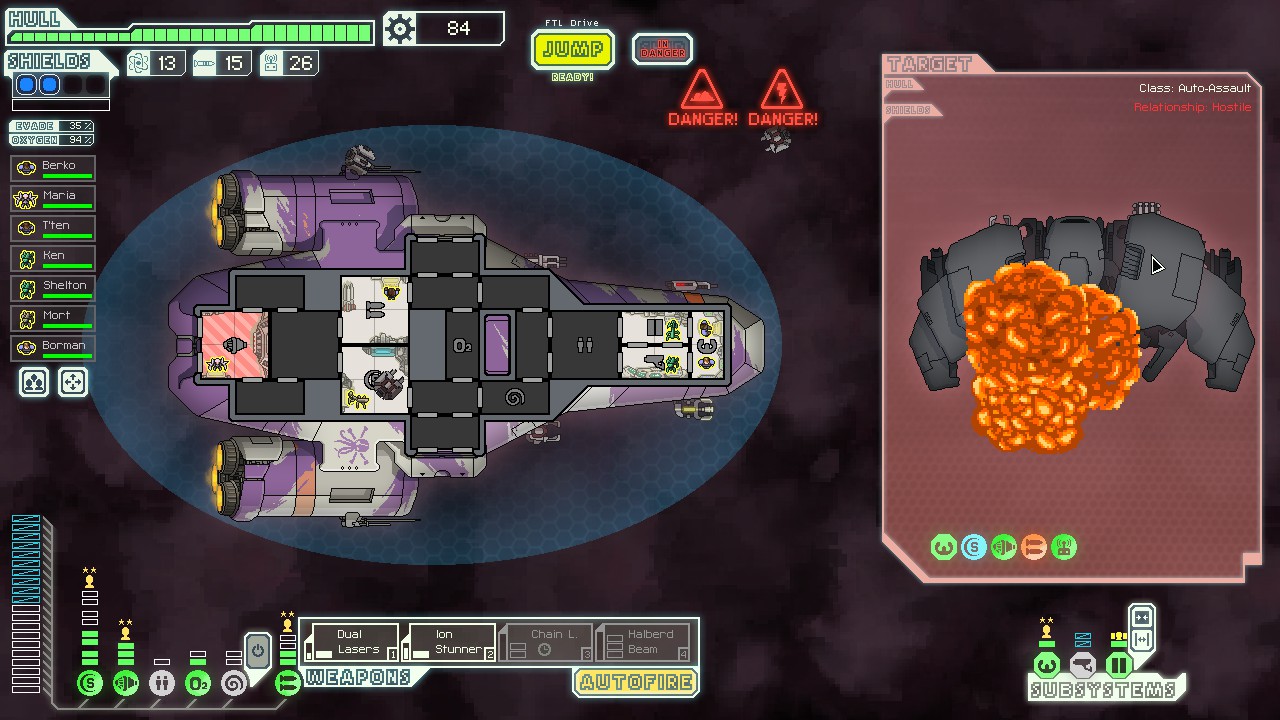 It was fun playing through this one at night. Its a fun experience. I kept drawing comparisons to Limbo as I’ve mentioned before, when really its like a 2.5D Uncharted. There’s just so much climbing, wall jumping and interactivity. Its not nearly as in depth when it comes to platforming as Uncharted. You won’t be scaling any ancient compounds, so much as scaling ladders up a ruined hospital. It was just a fun, easy game to play through.

Well it was a toss up between Deadlight and Papilio as my game of the week. I’m going with Papilio. It felt fresh, beautiful and vibrant. Deadlight is beautiful too, but Deadlight’s art style is realistic. Papilio’s is 1990s 16-bit. I didn’t expect to have fun with a game named Papilio, in fact I always go into Desura games blind. I don’t want to know anything about them. I just want to play and review. Well I was lucky that Papilio was a shoot’em up. A really fun, addictive one at that. I kept playing through again and again. Talking about it makes me want to play it again right now. I don’t feel that way about Deadlight. I’m not sure I’ll ever play that game again as fun and easy as it was. That’s why Papilio is my game of the week. Sad, because no one will ever know it.