My Fore Skin-Flea Circus is a brief, top down story based dark comedy adventure. Its tough to put a label on an experience like this. Its quite a unique story that I’ll try not to spoil too much, but its tough with a game this short. I can’t think of any other game that lets you rub petroleum jelly on a bald old man’s belly before you steal his keys and take off in his bus. From there, you’ll get your carnivorous fleas, and let them go to work on your victims.

If you’re looking for a unique game with something obviously weird, that only gets stranger, this is the one for you. Its not here to be mainstream or adhere to any standards. Its definitely not a game for children. They’ve got censored junk. What’s here is an out of the ordinary game that most people would avoid like the plague. Its full of crazy characters that only get stranger as the game progresses. It turns into a sort of surreal oddity by the end. It could just be real people in this game’s world.

Right off the bat, you can see the graphics are hand made. That’s not a bad thing. The characters look like they’re the best form of okay to look at. The map itself that you’ll be interacting with has the tiniest graphics I’ve ever had to squint at and say “is that an arrow?” They’re tiny and to make things worse, sometimes you’ll be a black spec of a character on dark pavement in a rainstorm at night. So good luck finding yourself. Its just easier to walk off the road to see yourself. It made the game more difficult than it needed to be; even if it did fit with the whole flea circus vibe.

With everything so small, it took me a while to figure out what to do. Maybe that’s why all of the maps are so vacant, because any more detail and you’d feel like you need to explore the area more when there’s nothing really outside of the story. So in this case, less is more.

Since your character is so tiny and screens are so big by comparison, you’ll be walking quite a distance. Not just walking, but watching as that bus takes you through 10+ screens while the title graphics slowly go by. Thankfully, you can skip through that, but I just felt there could have been something either shorter or more captivating than big text scrolling across the screen.

There are a few interactions with characters the you’ll need to hold the mouse button and basically scrub. Like a meter that fills up or in this case numbers that get higher until you’ve maxed them out in order to continue. Its more than just belly rubbing, but it never gets more perverse than that. There is shooting violence, and one brief moment of blood if not red painted faces, but there’s nothing gory. There are shockingly horrifying moments that made me cringe, but I think this game is okay with that. Its trying to do that to players.

As for the controls, they fall into the typical WSAD to move, E to talk, space to continue a conversation or do something and G to read an instruction manual on how to use your flea. I know I was happy to have a manual, because I would have never guessed that you need to click on a matchbox at the bottom of the screen to open it, revealing the flea, click on the flea, then click on someone’s face. Once you do that, you’ll hear someone screaming into their microphone. I hate to break the fourth wall like that, but its really just someone yelling in pain as they’re eaten by a flea.

Speaking of keys, don’t ever hit the ESC key, because it closes the game without asking. Its forgivable, since My Fore Skin-Flea Circus is short. At least this game warns you that’s what ESC will do, others don’t. Its not a brilliantly programmed game, I managed to crash it from holding down the E to keep knocking. The knock doesn’t stop, it only plays every millisecond until you depress the key. There are part where its still telling me to do something that was on the previous screen the night before. You can walk well off the screen without the game preventing you from doing so.

I really can’t recommend this game to anyone, unless you just want to see an oddity. its got a strange story and it revels in it. As a game, it functions a little cumbersome with the space and E buttons. Its difficult to see, but if everything on the map was larger, it would probably enhance the experience. Then I’d probably see it as some throwback to retro games, even if it would lose its unique, albeit hard to see style. I’ll now leave you with the one reason why should and shouldn’t play the game. 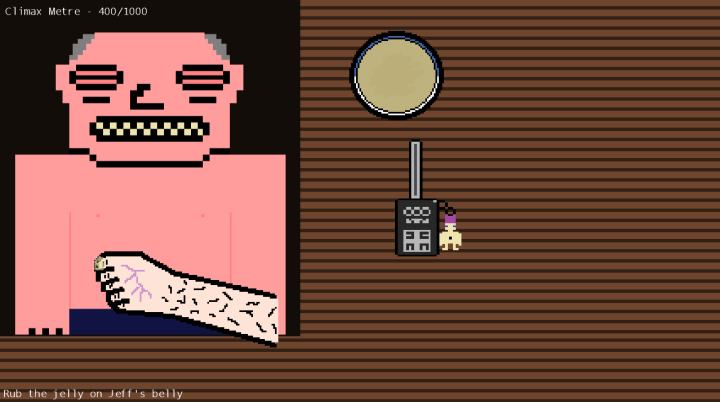