Deadlight is a 2.5D parkour action, but almost puzzle platformer in a post apocalyptic zombie infested Seattle set in 1986. If it sounds an awful lot like that other first person parkour action platformer in a post apocalyptic zombie infested game named Dying Light, you’d be wrong. Dead wrong. No, this is a game more about traversal than fighting waves of the undead that are named shadows. Everything in the foreground is black and shadowy including the zombies, yourself, the terrain, ladders and so on. The backgrounds are beautiful, diverse environments that you won’t get to explore so much as gaze in awe of throughout the game. This makes the game feel a kin to Limbo, but in color without the painful and vague puzzles.

Its really a five hour journey that takes you through the city. From your safe house, through the city, up buildings, underground in a trap laden labyrinth made by a madman, to trailer homes of suburbia, a stadium, a hospital and even a militia camp. That’s what I took away from this game were the beautiful vistas that looked like a team must have spent a lot of time on for what is essentially a budget title.

But how will you get there? You’ve got a lot of land to cover, piece by piece. Climbing ladders, hanging from ledges, sliding down rooftops, jumping over gaps, running from helicopters, wall jumping, crouching under doors, rolling from high leaps, crawling through air ducts, pulling boxes, pushing over things to barricade doors from zombies. You can even yell, call and taunt zombies to your location. Its all simple and easy. You’ll even get a fire axe that can smash open doorways and boarded up windows. It can also smash through zombie heads! Its not a gory game though. You won’t see blood in the game, but you will see art blood in the cut scenes.

You’ve got stamina so every time you swing the axe, that stamina goes down. You’ll get slower with your swings, everything will become slightly blurry until you rest. This makes you vulnerable to zombies. Normally you can button mash to shake them off you, but when you’re groggy, you’re susceptible. Even with one block of health left, you can still do a good job of shaking them from  you, unless a zombie sneaks up behind. Fighting zombies is a rare part of the game, most of the time you just avoid the ones in the foreground and the ones in the background shuffle to the foreground. When you kill a zombie, they disappear into smoke after a some time goes by and they’ll appear in the background to do it all over again.

The stamina drains as you hang from ledges or wires. Once your stamina is gone, you fall most likely to your death. Speaking of death, there are electrified pools of water that you’ll need to turn off the power to get across.

I can’t call the game a survival horror, even though there’s zombies and limited ammunition. You’ll get a revolver that you need to load each bullet and its quick enough. Shooting involves using the right thumbstick to aim a full 360 degrees and pulling the right trigger to fire. There are of course keyboard controls, but its a game from Microsoft, I’d recommend using the 360 controller in this case. You can find more ammunition on bodies strewn about the game. I never felt like ammo conservation was an issue. The same body will always have more ammunition. There’s also a shotgun, which ammo is very limited and a slingshot that you’ll get for one part of the game. This slingshot has unlimited ammo and you can always bounce your rocks off walls to hit triggers. Other than that, you’ll need guns to shoot out windows, locks and other things. The game always makes sure there’s an ammo corpse somewhere.

Everything you’ll need is highlighted with a slight glowing tint. You can turn this off, but it really helps and at some point, I think the game realizes that you know what you’re doing, so the tint becomes less present. There are twinkling sparkles on ledges. There’s a big emphasis on ledges and climbing, you can even hang from a ledge and drop down. Otherwise, falling great distances hurts if not kills you. Oh it also kills the zombies too.

Since you’re so burdened with stuff, you can’t swim, which makes for some brief water puzzles where you’ll raise and lower the water. With all of the light puzzles in the game, I never felt like anything was too difficult or vague. Its an easy and enjoyable journey through Deadlight, but there are moments you’ll need to run and get things correct. The last moments of the game it seems like a puzzle against soldiers in order to do the right thing at the right moment. If you jump off a fence, you’ll get gunned down, but if you drop off the fence, then you can shoot the soldiers. Stuff like that. Other times, you’ll need to run to avoid zombies chasing you or a helicopter’s gunfire.

For the most part, zombies are a big part of the game, but other times its about a para military group chasing you. Its really just a helicopter. There aren’t any soldiers outside of the final moments of the game. Your biggest foes are still the zombies.There’s a sense of dread as they come closer or overwhelm you, but for the most part, they’re easy to avoid either by taunting to lure them in and jumping over their head to knocking them down and running past.

At some point, the danger becomes traps as an old man forces you to run through his rat maze to the end. You’ll need to be quick to avoid falling spike traps, crumbling platforms and its all interesting stuff and the traps look believable within this art style and setting. I just know some people that play zombie games only do it for the zombies, but this is a game about traversal and staying alive, the zombies are just in it.

If you die, you’ll merely restart from the last checkpoint. I can’t say that the game is too death heavy outside of a few rare points. There are health packs here and there, but every death refills your health, so they almost feel pointless. There are a lot of other collectables and secrets. I can’t say there’s too much exploring or secret areas, it feels like a very linear experience, but still a fun, enjoyable one. For those that find the game too easy, once you complete the game, there’s a nightmare mode with no save and only one life. Its possible I’m sure.

Throughout the game, you’ll hear your character Randall Wayne talking with his smoky gravely voice, explaining things. So you’ll always have a hint at what to do or how to do it. He’s a good character, but his voice seems out of place from everyone else in the game. Its only noticeable in cut scenes. To flesh out who Randall was, there are a few flashbacks that hint at things as well as explain how he learned to fire a weapon. There are a few nightmarish hallucinations where the skies turn red and zombies in the background are giant. 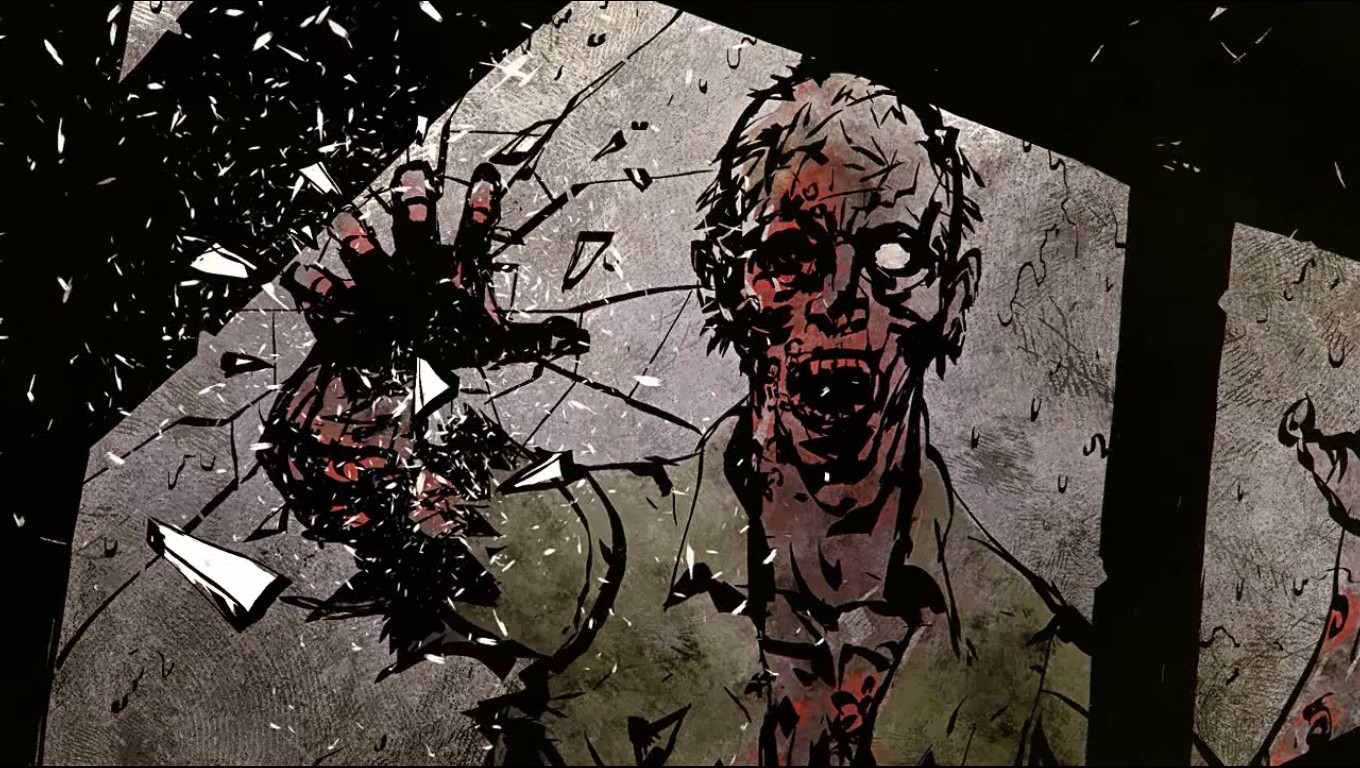 Between the actual game, there’s beautiful yet grim artwork during cut scenes. I’d much rather have these sort of still frame art style than something in the game’s engine. There are a few things done in the game where you lose control, but they’re brief and rare.

I did manage to find a few bugs here and there. Pausing coming out of a save seemed to freeze the game. There was a cut scene where the audio just ended and didn’t resume until after the scene. Its nothing that ruined the experience.

With all of that said, it was a fun five hours. Easy enough to be relaxing and let me use my brain. I think the beautiful vistas really helped my enjoyment. I found myself looking at things and taking screen shots.