Gradius is one of those original NES classics back from 1985 that was sent from the future to destroy you. This horizontal side scrolling space shoot’em up was forged by an alien Satan, because Konami sold its soul for a hit game. Only Satan could make such a monstrosity, but its not NES hard, Graius is arcade hard, because it was originally released in arcades. It was meant for your quarters, but when it was ported to the NES, you’re given a paltry three lives. 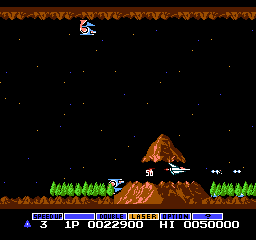 You start out with a standard gun at the tip of your Vic Viper space ship. Holding down the A button fires slowly, but rapidly tapping the button shoots fast, but not fast enough. The fact you need to rapidly press the button turns Gradius into a test of endurance, but between the levels there are brief moments where you can rest, but the game never actually stops.

Destroying rust colored enemies will leave a sort of currency you’ll need to collect in order to power up your ship. For one pod currency, you can upgrade your speed, for two, you can enable bombs that will drop and run across the ground, for three you get a double shot that fires up at an angle. Four pods gets you a long laser beam. Five pods gets you what I’d consider the most valuable asset and that’s an option. You can upgrade to two options that will shadow your ship and act as a second set of guns and bombs. Six will get you a double shield that lets you take some extra damage. Compared to future Gradius games, these upgrades feel very limited. The game itself feels very basic, but a lot of games from 1985 are limited in scope and resources.

Oh and did I mention if you get hit once you die? That’s what makes a shoot’em up realistic. One bullet or enemy will explode your ship into space dust. Its common in Contra, but in that game you’re agile and nimble. In Gradius, you aren’t. Hitting a solid object will send you to the great space heaven beyond. To top that off, I can’t call the hit detection pixel perfect. Its good, but I question some of the times I’ve blown up when a bullet looked above me. Its one of the things you start to notice after four hours of dying. 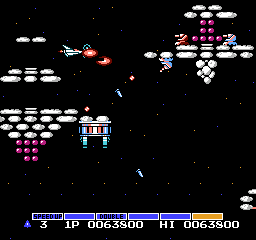 Even Konami knew how thumb breakingly difficult the game is, so they invented the “Konami code” just for this game. Something that would become a staple of Konami games in the 80s. Oh, but the subtle genius of how difficult this game is that when you die, your Vic Viper space ship starts without any power ups and puts you at the last checkpoint, so the currency pods become a challenge to get. You can get extra lives with points, but why bother when you start each live with nothing. The Konami Code is entered at the pause screen in game to activate full power ups. It balances a difficult game. When you’re out of lives, you start from the beginning.

Every level starts out in open space, where you’ll fight waves of enemies. Destroying an entire wave of scout ships that fly forward, then fly away will net you a currency pod to collect. Then after a few waves and tougher enemies, you’ll fly into an obstacle course. The first level only has a ceiling and floor, with a few volcanic slopes here and there. The second level has what I can only describe as white space sandbags with ruby jewels you’ll need to shoot through to advance. Oh and turrets. Don’t forget about turrets.

The third level is when the screen starts getting full of bullets. Easter island heads fire rings from their mouths and you really need to plan safe routes to travel. The answer is obvious, do you take the route with four disc shooting heads or the route with two? Even if the route with two is more difficult and precise to get to, I’ll always take the one with two. These two levels introduce paths and narrow corridors, where the first level was wide and open. 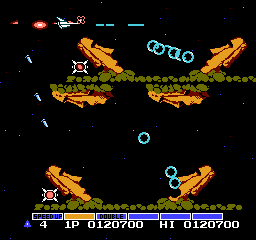 Every level has what I call an insanity part before the boss. One of those sections of the game that locks the screen in place and then has dozens of enemies or projectiles after you. A segment that you need to have full upgrades or luck to survive. You do this all while crazy chip tune banjo music plays in the background. That’s how you know what level of insanity you’re at. The first level has twin volcano erupting for a minute or so. The second level has blue computer chips spawning and throwing themselves at you.

Gradius only gets more difficult from there. If Gradius was in the Rocky IV movie, it wouldn’t be Rocky, it would be the roof of the building that would collapse to kill everyone.

I have a feeling that Konami never expected anyone to get through the third level, because the fourth is a recycled first level, but upside-down. I’d say its easier fighting ceiling volcanoes than it was when they were on the ground, since you’ll have options to guard your head instead of mere bombs.

At least the fifth level changes it up with new enemies that lead you into the level. Then you’ll face giant meaty brains with arms that shower you with bullets as you face probably the most fearsome enemy of all… the slow down. The game begins to feel like its not space you’re flying through, but tar. Two of these meaty brain enemies on screen results in the slow down and I can even say its this slow chug that makes the game easier.

The bosses are pretty lackluster. By bosses I mean just the one that you face over and over again. They get quicker and deadlier with each battle, but nothing changes. In fact, the game really amps up the challenge from the first level to the second. Enemies that wouldn’t shoot in the first level, now shoot in the second. Part of the difficulty is knowing where to be. You need to control the screen on the top with your options and bombs. If you drop your ship to the bottom, you’re very prone to attack even with a double gun, its just not aimed directly up. Giving up territory is almost a death sentence. Death itself is good incentive to reset the game.

The sixth boss is different though, but its more like a pair of guns or volcanoes than a boss that moves and does things. If you’ve mastered the volcanoes, you’ll find a safe place to stay and just destroy the boss quick enough. 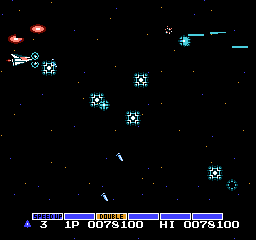 You’ll find that the seventh level is by far the most brutal because of its bottle necks and enemies that appear from the left. The strategy is to stay in the middle, or top middle when the strategy has always been to stay behind. It gets so brutal that when you respawn after dying, the game manages to spawn enemies on top of you, costing you two lives for the price of one because of these bottlenecks. Its painfully miserable and proof that the game isn’t skill its luck and an upgraded ship. In fact that goes for the volcanoes and enemies that can spawn in on you.

At the end of the level, there’s a closing gate that you’ll need to be in, because I know that I couldn’t break through twice with full power ups let alone the standard gun you start with. Then at the end you get a “Congratulations!” screen letting you know that the 8 hours it takes to beat an hour long game was all worth it. There weren’t even any credits! 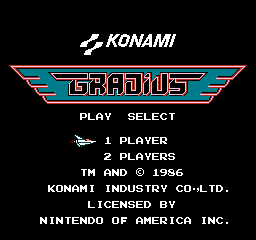 The music has a good beat, but its all in a really high pitch. I can’t really say this is one of Konami’s most memorable soundtracks. I’ve never hummed it in my life like Contra or Castlevania. It does keep a good pace to what can be a hectic game. The sound effects are always good, the sound of bullets and lasers never gets annoying. The sound of secret points is a super nice thing to hear. Vic Viper sort of echoes when you blow up before a still calm once you’re gone.

The graphics aren’t really a high point of the game. Nothing is at all bad, its very crisp, and looks like it should. There’s just no background and maybe that’s a good thing since everything stands out so much more when its on a black background. You’ll always be able to see bullets as they box you in.

I can completely understand why Gradius is a classic from the 80s, but the challenge overtakes the fun. Over the decades, I’ve always heard how something is Contra hard and not Gradius hard, but that’s because more people played and dare I say completed Contra compared to Gradius. Its just not fun enough to complete. I might be hardcore, but I’m not on that level for Gradius.

One thought on “Gradius NES Review”