My first impressions of this game are awful and they keep getting worse. While I’m happy the game has voice actors, they feel so stiff and robotic. They all have great voices indeed its just that they feel pretty rough and slow talking. Its difficult to get into when I’m not laughing at how awful they are. The animations are really stiff as well. The game is nice enough to show more than the talking heads that Morrowind and Oblivion have always shown. In Two Worlds, you get to see an entire body when you speak with them.

For those that don’t know, because I sure didn’t, Two Worlds is a role playing game that feels like a MMORPG. Everything seems to take place outdoors. You get attacked by four enemies at a time and I feel dreadfully underpowered. I spent the first two hours just running away from enemies, because they’d almost instantly kill me. So I’d often end up with a dozen enemies chasing me as I’d run through one pack to another to another. I guess the good thing is that it lets me get further in the game without having to actually fight them.

That’s right off the bat straight from the start. I just can’t kill anything beyond the two enemies in the tutorial dungeon that lasted all of five minutes. I’m stuck resorting to tactics like running into town and letting all of the villagers kill the attackers. Its brilliant. Then I loot the bodies while the villagers that did all the work don’t even mind I’m stealing what should be there’s. That’s video game immersion for you!

So two hours in, I’ve now got some decent weapons and discovered more of the game’s exploits. I’ve figured out that there are two types of totems out in the wild. Ankhs that heal you and totems that replenish your magic. The ankhs also act as respawn areas. So basically there is no punishment for death in the game.

I’m telling you that to tell you that while running through a forest, I encountered a man by a cave. He told me that he had a thief trapped down in a hole. That thief had stolen a worthless ring from him. He’d go down and get it himself, but well there are skeletons in the cave. Well my character fears no skeletons, when in reality yes I fear skeletons. My character doesn’t speak for me, he’s an idiot. I might have been at level 10 or whatever it was, but I was still weak and powerless. In fact a few levels before that I had figured out how to assign parameter and skill points. 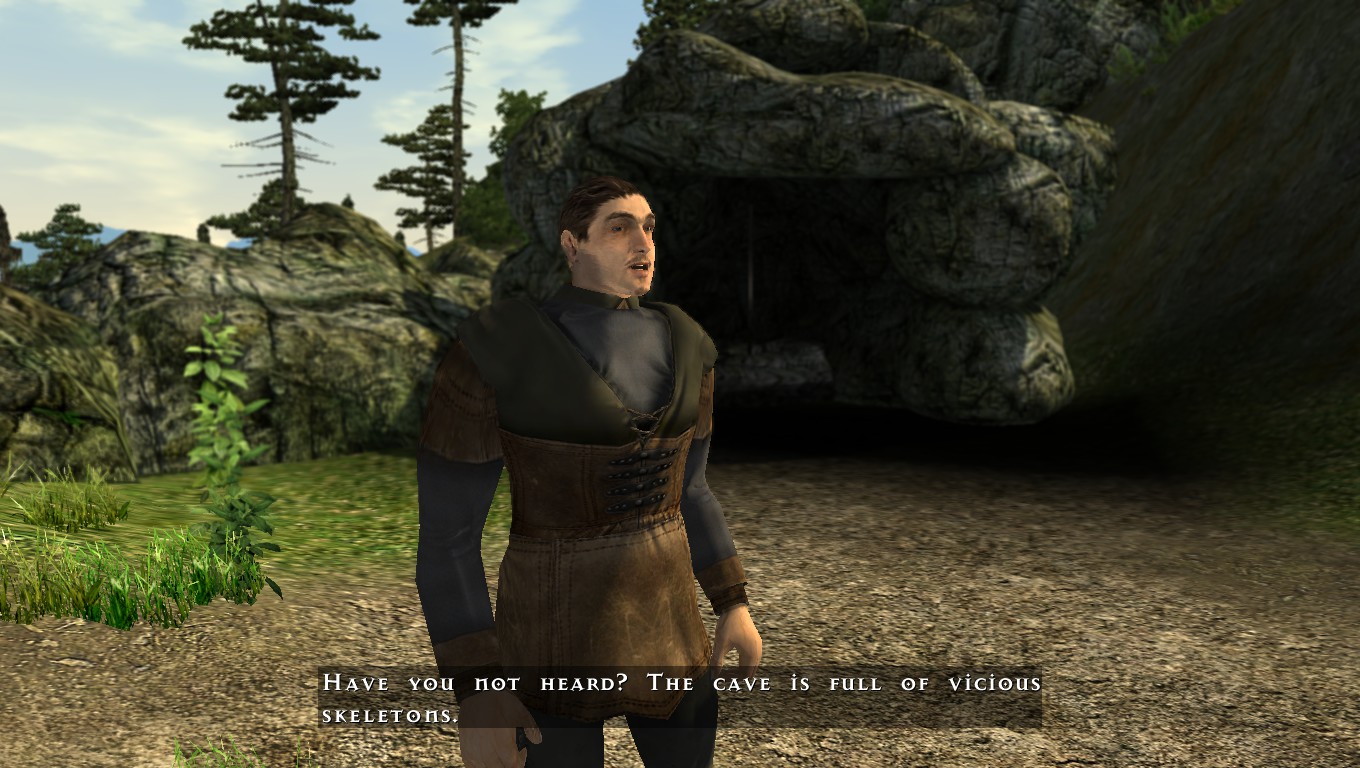 So yes I went down into the bone cave where I was greeted with an ankh, right there when I first walk in. That must mean death is near and surely it was. These skeletons beat me to death only to let me respawn back at this ankh. Well after my first beating I decided that I would use my only spell against them, because weapons felt laughably ineffective. So I used my magic to damage them, drank mana potions and then shot more fireballs at them.

Well this justifiably angered the emotionless skeletons. See I was firing from a distance, so they ran to me and I ran away. I had run far enough back to the ankh where I had unlimited health, but not magic. The magic ran out quickly. These skeletons would beat me to death right there next to the ankh. I’d respawn and they’d be right there to welcome me with their swords.

To make things more interesting, these skeletons would kick dirt in my eyes so I’d be blind and unable to strike them. It may have taken me a while, but I overcame the skeletons one by one by pecking at their health with the strongest weapon I had. With one dead, I took its better weapon. Then when the second one died, I took everything I could. I didn’t feel stronger at all, but at least stats wise my weapons and armor were better.

After some anguish, the skeletons were dead, which allowed me to run further into the Bone Cave. That’s where I found a large chamber and yet more skeletons that quickly beat me to death. When I respawned, I decided to run down a different path through the cave to yet another chamber that had oh you guessed it, skeletons. At that point I thought no, I’m not dealing with skeletons anymore. So I easily ran past them and deeper into the cave.

The two large chambers were connected behind them both. In that hallway of a connection I met the thief who happily gave me the ring if I could kill the skeletons. How does one kill something that’s already dead. Anyway, he had a necromancer conjure up some skeletons to defend his hideout, but well they turned on him. You don’t say, why not die and respawn at the ankh then leave? Nah the game doesn’t work like that, only I can use the ankh. Everyone else can see the ankh and acknowledge it, but I’m the only one that can use it. That’s how video games work!

Well I had my mission, destroy the skeletons. As it turns out, the game must have thought that I had defeated the two clumps of twenty skeletons, so it respawned more skeletons. Oh not just any skeletons, tall giant skeletons with better weapons! After they killed me, I respawned back at the ankh and then lured the giants back to the ankh where I could fight them standing in the ankh’s healing wake without dying. After a while I started timing it. To take out six or so giant skeletons it took 20 minutes. Every sword swipe was barely a chip. They even dropped better equipment that didn’t feel any stronger.

After that, I decided to speak with the thief again, knowing full well that I still had another chamber with ten or so skeletons to slay. Well he thanked me for killing the skeletons. While this might be seen as an issue that I really didn’t kill all of the skeletons, I’ll overlook that, because with two paths to chose from, he can just avoid the other skeleton horde. He could have just ran by them like I did over and over again, but I seem to be the only one with that ability. Then there’s the issue of how he got that deep in the cave with the horrible skeletons trying to kill him. He could have had me bring him a potion to chug to recover his health.

Wanna know the kicker about the whole thing? The fact that one of the last few skeletons I destroyed had a friend. The ghost of a skeleton. Yes that’s right an undead skeleton become a ghost to fight me. Oh I know its completely illogical, but I still enjoyed seeing it. You can kill something so dead that it becomes a ghost!

The whole thing took about an hour, just because I was so greatly overpowered, but the ankh was right there to recover and revive me. Its just a testament to how awful the game is. I know people love open world games that let you do anything and go anywhere, but this time I needed to be saved from myself. I think that not having the ankh there would have made me forget about the quest all together. To top it off,  I think the entire process only gave me one level up, even if they were so overpowered.