As always, I played a lot of games this week and I’ve been churning out a review per day for the past two weeks. Making probably 55+ reviews in a 60+ day span. I could probably up the anti by reviewing more old school games that I can bust out in less than a day, but without Steam’s viewership there’s not really any point to reviewing more games than I have to. For Valentine’s Day, I have broken up a list of 12 unconventional romances in PC games that are set to be published February 7th and the 14th. Look forward to that craziness. I’ve also taken off the click through restrictions so people can read my blog via the reader. Oddly enough I didn’t take a hit stats wise. The stats are still growing.

Not spending any money on video gaming has become more of a challenge with the Humble Bundle dropping at least 9 quality games for $12. Not to mention all of the other bundles that I’ve skipped in the past month to keep my resolution. Its been interestingly painful to see them come and go.

I always like to go from my worst game to the best so I’ll start here. This wasn’t my type of game. Its graphical fiction without many choices. I gave it a go, got what I felt was pretty far, made the wrong choice, had to start over again from the beginning. Luckily I can remember my choices and skate through to where I was, but all that clicking with no sort of check point system felt needless. I’d probably enjoy the game more if it had more choices to make me feel important.

I do have to compliment the art style. Its a real highlight. The rest, I just couldn’t get into. As for a full review, I just didn’t find myself engaged enough to finish it, so sadly there won’t be a review even if I could lace it with my own humor to make everyone laugh.

This is a quickly made 3 level reverse tower defense game. I’d say similar to Warzone: Anomaly Earth or whatever its called. You buy two different types of tanks and send them along a line where they will destroy turrets. This is obviously the start of a game. It can be completed in under 10 minutes. I’d like to see the game progress with more enemies, more levels, different types of tanks and so on. There’s nothing wrong or broken about the game, but there’s just nothing really to the game for now. I’m not even sure officially reviewing this title is worth my time. The developer says its only a beta and it sure feels like it. The game is over in about ten minutes. I’ve given in depth reviews for other obscenely short games before, but they were complete and this just feels lacking.

This was an interesting one simply for the fact it was such a hassle to setup. I had to sign up since this is a web game. There’s nothing wrong with that, but then the game would hang at 89%. The developer patched it and then I could load the game to 100% where it would hang. A few days later it worked. So huzzah. Its a fun casino game disguised as a management game. After playing for 8 hours I never managed my casino, but I did get involved in a lot of gambling and quests that made me gamble in certain ways. Like normally I play roulette safe. A 50/50 chance, well one of the quests is to be on actual numbers. I’d never play like that, but I had to. I kinda feel like its false advertising. Its just a typical casino game with no real RPG elements outside of getting quests. I never managed my own casino and that was the big draw to the game. My review is written for it, but I’d like to keep playing to flesh out the review, but I doubt that it will change much.

Someone suggested that I play this game knowing its awful, but you know what, I’d rather play an awful 2D platformer than an good visual novel. I put in a few hours to this game and its got some of the most cryptic items and HUD that I’ve ever seen in a game. It took me around thirty minutes to figure out the HUD and two hours to figure out how to pick up certain items on the map. Well the catch is you don’t pick up the items, you destroy them with a special attack that you hold select and attack to use. Some how I figured it out two hours in. I see this game as an insurmountable challenge. That review is coming three Mondays from now after Super Mario Land 2: 6 Golden Coins.

This was a really fun gem, even if it was a short two hours. This game has a certain magic to it, I just wish that it had controller support. I hate being on my big screen attached to a keyboard for a game like this. I only see good things for this game with a lot of replayability in short bursts. It was silly fun and I ended up laughing out loud a lot of my mistakes. That’s rare to get that sort of reaction from me. I’d like to talk about it more, but I’ve already got a review out for it.

This thing was just confusing. Not because it was tough to understand, but because there were so many black objects hidden in the darkness. Any sort of dread was taken away when I had to search room by room for tiny batteries that get added to places I’ve already searched. I ended up having to cheat by changing the visual settings to the lowest so shadows would turn off. I can’t really call this game fun so much as it certainly was an experience. I will say that it felt far better than playing similar short games like An Apparently Normal Room.

I got into this game for the first time in three years. I fell out of it because of how many keys a MMO needs. This game could easily use a 360 controller, but no it has three different control schemes each uses 100 keys. I even had to go through the first mission twice for a grand total of 4 hours, because the screen shots I took didn’t save. Taking screen shots was a pain in general, because the HUD key is bound to Steam’s native screenshot key. I can’t say the game was fun so much as it was easy. It could have just been more fun with easier controls, but again that’s not the style of a MMO. 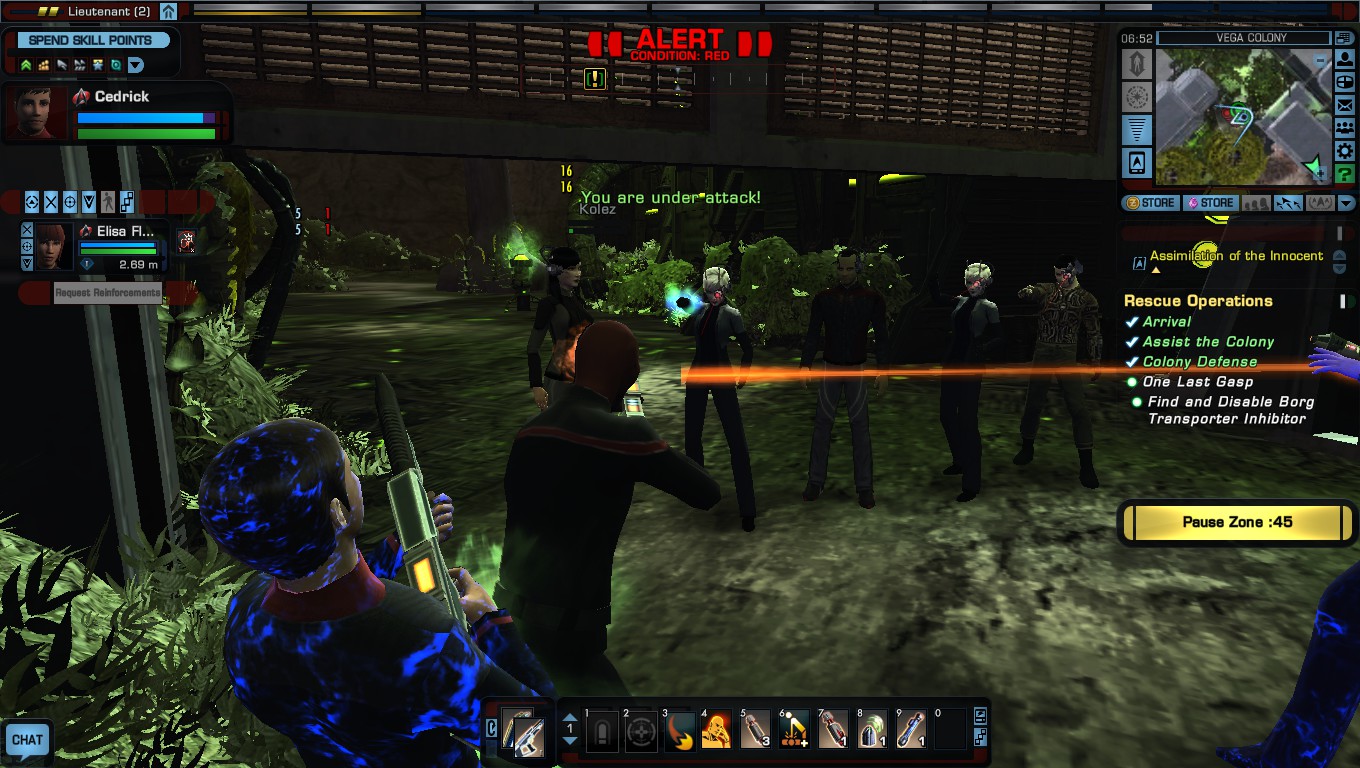 This was nothing but errors for me. Specifically audio errors and glitches. and glitches.glitches.glitches for. for for for me. It also seems to be a beast on my system which seems quite stupid. The game recommends I use the low settings, which is a shock, but whatever. Even then the audio errors are still there. I also hate the fact that to find a game, you need to exit and close the game. Then go into your web browser and look up a server. There is quick play of course, but I’m in the United States and it kept finding me a server in Germany. That seems a little off, but the entire thing seems off. Since I can’t be in game without being on a server “playing” the game, I can’t change my key bindings and play around with them without wasting my team’s time that is trying to play the game. Hardline itself felt like a merge of Counter-Strike: Global Offensive, Payday 2 and Insurgency all rolled into one. I would review it, but with the audio glitches, they prevented me from sinking any time into the game.

Well I reached my tipping point with this game about 8 hours in. I kept going bankrupt and kept randomly failing a particular scenario. To top that off, the game would freeze and take away my mouse control, which forced me to close the game, losing my progress. It just didn’t make things fun. The game itself is a lot of fun once I got into it two weeks ago, but these game breaking bugs with either DOS Box or Origin got in the way. Plus, there was some sort of flu going around and no matter how many janitors I hired they just couldn’t keep the floor clean as you’ll see below. Expect the review soon. Its coming down the pipe.

I played four hours of this and wow my left thumb knuckle hurts from having to flip the left stick to jump. Over and over again. Unrelenting, jumping with the left thumb stick to stay in the game. I also spent thirty minutes on a handful of levels toward the end. They have a great art style, which helps, but the art itself is meaningless when it all blurs past my eyes so fast that I started to get a headache an hour into each time I’d play. Its all about color pallet and mood. OlliOlli has both going in its favor, but as challenging as the game was, it never engaged my mind. I ended up thinking about other things as I’d play, but that didn’t affect my performance. Its all about reflexes. Looking to see if your next surface will be a grind, a landing or a failure.

I’ve really started enjoying the human drama here and hating the boss fights. Including a boss that is glitched so it is invincible. Its beautiful, because I can tell the boss is invincible before I start button mashing. The official stance from Electronic Arts to fix the boss glitch is to turn my video settings to low. Every night at 7 pm I start thinking about the game, because its dark out and that’s the best time. I can’t even say the game is scary, but it does seem horrifying and intense. Its horrifying, because its more like John Carpenter’s the Thing than ever. The enemies have all been redone and they’re extremely mutated. One thing that I really don’t like though is how enemies just fall apart. Strategic dismemberment has always been a part of the game, but now its like I sever a leg off and the enemy’s arms and both legs fall off. Its just odd.

This was my gem of the week that was randomly given to me by a Steam friend. Its like Oblivion meets Quake and that won’t be the last time you hear that from me. Its a really fun game to play with class selections. Its really fun up until a point where it then becomes Dark Souls difficult, but without a combat roll. In a way the game also feels like a better version of Daikatana, but without the time traveling. Another thing that I really like about the game is the constant changes in scenery and art assets. No look lasts long enough to overstay its welcome.