Steam is having a free weekend for Saints Row IV and Sid Meier’s Civilization: Beyond Earth (almost called it Galactic Civilizations, but that’s a different franchise). So I tried the latter one pretty quick only to discover that the game crashes after the opening cinematic. I’m sure it plays like the other Civilization games, but on a different Earth like planet! But that’s not what I’m here to talk about. I’m here for Saints Row IV.

I had played the third and I own the second one somewhere on Steam even if I haven’t owned it. I prefer this fourth installment more than the last one. They play the same, but with a lot added into it. Silliness, magic, telekinesis. You don’t even need cars anymore when you can super run and super jump. Its like being in the Matrix. The movie, not the printer.

Its amazing how much an over the top game can still go over the top. From the streets, to being pop icons in the third, to fighting aliens in the fourth. Its like how John Maclane from Die Hard saved a building, an airport, then a city, a nation and then has to save a world. Funny there was even a fifth one. Does anyone even remember that? 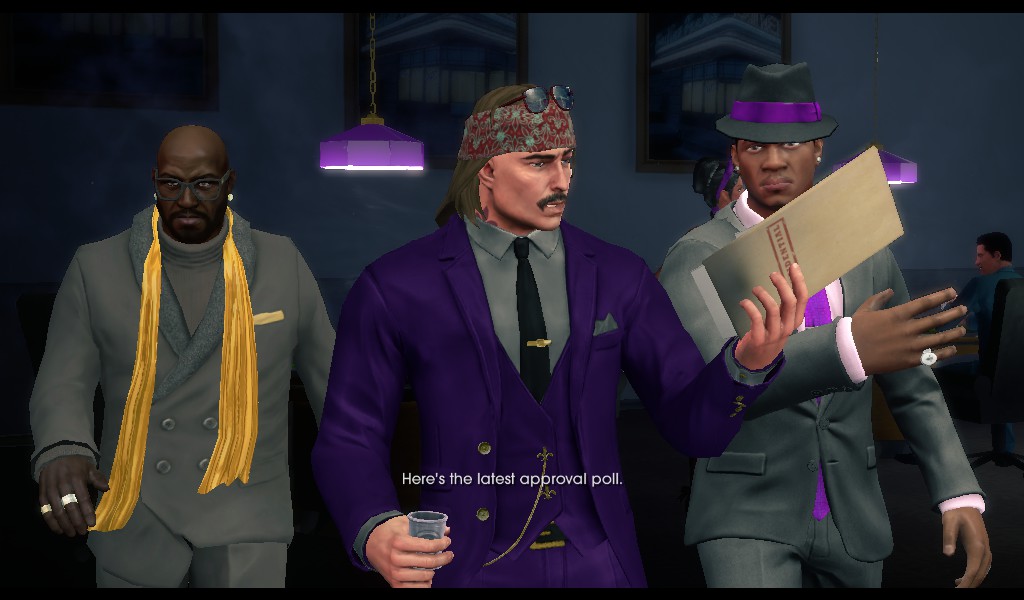 As President, I felt like it was Duke Forever’s plot. You’re someone mega important, you live in a big rich house where brown nosers flock to you. Then suddenly aliens crash the party, your people are taken and you fight your way to a turret section where you take down a mother ship. Sound familiar? Its Duke Forever’s never ending awful first level. That’s not the only game or movie Saints Row IV borrows from. I only say borrow, because its this franchise. If it was a lesser franchise that wasn’t fun, I’d say it was stolen. The world itself feels inspired from Far Cry 3: Blood Dragon, but this world was probably in the works for years. There is even a parody of Superman 2.

Saints Row IV manages to bring back all the characters from the last game. The least famous of all the characters that is back is the city itself! Its back, but now its dark and cybernetic. After four hours in, I’m just doing the main missions, but along the way my interest gets perked to deviate. Being thrown into attack zones. Liberating parts of the city by destroying 3 areas and a final main area. Its all fun, but its all the same. Not the same from the last game, but the same as in you’ll be doing it over and over again in this game. Its really your choice. Do it or not. Its all fluff.

I am really enjoying it. The game does a nice job of amping up the challenge it feels different from the previous game, even if its literally the same city. The only problem is doing something once only means you’ll need to do it two dozen more times before you don’t have to do it anymore.