I’m in your base, killen your dudes! This is a very simple and shallow tower defense game with a cartoon look and characters that look straight out of Team Fortress 2. For those that don’t know, it has no affiliation with TF2. The game is basically a wide open empty map. You start with a certain amount of cash to buy your towers. You can place these towers anywhere, well almost anywhere. The enemies don’t attack, they just run from their starting gate or gates all the way to your base. The game says your base, by base, I assume they mean your gate, because you don’t see a base. These are basically open courtyards. If enough enemies get into your base, you’ll lose the game. The limit is 20. Each game has at least 100 waves of enemies, so in 30 minutes you can get through 60 or so waves. Its very easy, it just takes a long time to make it through, but luckily when you quit it saves the game. 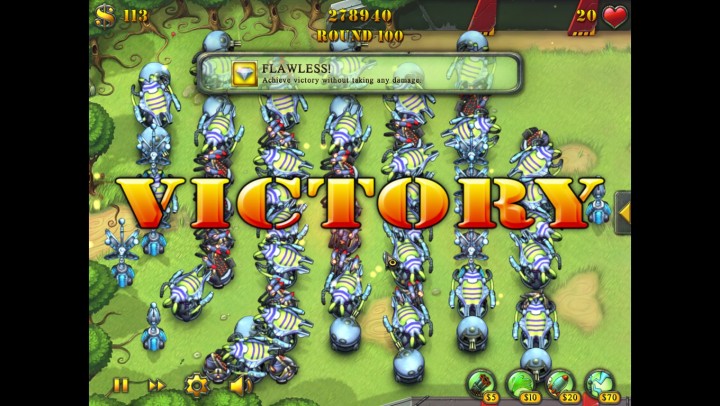 You’re tasked with arranging these towers, making walls of towers, and making a winding path for enemies to follow. Basically make a maze of towers. Can you plug a gap and make an unsolvable puzzle? Nope. The enemies will plod through from left to right. If something blocks their way, they’ll path around it, but not intelligently. They’ll chose a path that can end up having more of your towers. There is a wide variety of enemies, standard soldiers that look like TF2’s soldier character, a heavier character, that looks like TF2’s heavy, they’ll eventually get jeeps, motorcycles, tanks, helicopters and giant robots. What do they all do? Just walk. Again they don’t attack you. The helicopters and planes will at least fly over your towers in a straight line headed for your gates. Your job is to destroy them before they enter your gate. Since every map is just an open courtyard, you can just make the same maze over and over again.

Now that we’ve covered the enemies, let’s talk about the towers, there are a few types of towers based on what mode you’re on. Classic mode has only 4 towers on every map. Extended adn endless mode have 6 towers. Gun towers with short range, goo towers, that have a longer range, but will shoot goo to temporarily slow enemies down. Next up there are long range missiles, which are great to have. For the fourth tower in classic mode, there is some sort of electro tower. You don’t unlock any new ones. In extended and endless modes, there are flame towers and minimum / maximum ranged giant bomb spitters that are pretty expensive. You can upgrade each and every tower by right clicking it and selecting to upgrade it for a price. Do you want to know which towers do the most damage? The stats are in the help menu item, but they should be hover items that just appear when you go to select which tower you’d like to place. The tower guns turn, but the electro towers don’t turn and you’ll pay extra for it. You can hit the space bar to pause the game to plop down towers, but there are only two speeds, normal and fast.

The big issue that I have with this game is that its dull. There are far better and deeper tower defense games out there. This game throws 100 waves of enemies at you. It shows you a list of what enemies are coming next and where…. which is good, if I didn’t have to click on it to open it up each time I wanted to see the list. Other wave based tower defense games simply have a list of what’s next, like how Tetris would show you what block is next. Then the fact that each level / map is 100 waves. That’s just far far too many. The game gets dull and boring long before you’re done with 100 waves. If you beat 50 waves, then you unlock new maps. But really, the maps are all the same, entrances and an exit. The only difference is how it looks. If you get past 100 waves then it unlocks new modes for the map. The modes are painfully the same, just longer! After 90 waves I didn’t even have to touch the keyboard anymore. I just watched the game play itself. There are also three difficulties for each mode if you dare.

When you die or beat a map, it lets you enter a high score with leader boards for your friends and all of Steam. The sad part is the score system is flawed. When you defeat an enemy, you get X amount of points, so if you have a perfect game where you kill everything…. you’ll get the same score. It should have been time based. Kill an enemy quickly, get more points. Another problem that I have with the game is the fact to move the map around to see everything, you need to click and drag, but for the most part maps are the size of one screen, so you don’t even really need to move the map, except for when a helicopter gets past you.

A lot of people on the forum complain about mouse lag, but really I don’t notice it that much, other than in the menu, but its a game breaker for some. Another headache of this game is when you lose, you need to exit out of the level, then play it again, select the level and wait for it to load. A restart button after losing would have been appreciated.

Maybe this is a great mobile game, but for PC and Steam, there are better tower defense games out there. This one is just forcefully long, boring and offers no depth or variety, but at least there are nearly 100 achievements. You can tell how dull the game is when you look at the achievements, there are 85+ easy achievements that only 15% of people have unlocked. Go buy Field Runners 2.