I’m sure we’ve all played this, but the beauty of this game is that we all can go back and still play it 20+ years later. Super Mario Bros 3 is still an incredible game no matter how old it gets. It is as fun to play now as when you were a child.For those that still don’t know what this is, Super Mario Bros 3 is a 2D platformer of the highest caliber. Its not just one of if not the best game of Nintendo’s original console, but its one of the greatest video games of all time.

Its simple, its fun, bright, colorful, diverse, challenging and easy to pick up and play. It takes off as an improvement and enhancement from the original Super Mario Bros game and left out most of the elements from its predecessor Super Mario Bros 2. The controls are just as simple as ever. Left and right to walk, down to duck, A to jump and B to run so you can clear large gaps. There are a few other gameplay twists that I’ll talk about later. 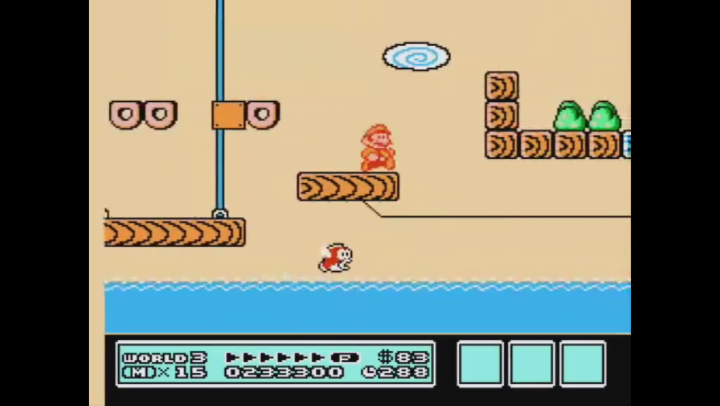 In this game, you play as Mario, or if you’re the second player, his brother Luigi. The princess has been captured once again and the kings of each land have been transformed into creatures. In order to transform them back, you’ll need to get a wand from each one of King Koopa’s kids by defeating them high in their airship fortresses. Then in the final land, you’ll face Bowser, King of the Koopas one last time. These seven bosses are a massive leap forward. Each boss has their own gimmick and attack pattern. Not to mention a mini boss in each fortress.

The bosses aren’t the only thing diverse. The eight worlds or lands that you’ll explore each have their own gimmicks and themes. A standard starter land, desert land, ice land, water land, giant land where everything is big, a sky land and so on. Every cliche’d land is here for you to explore. Unlike previous games, you start on a map connected by lines that you’ll go to and play. This offered a unique sort of freedom, because there were branching paths out from certain levels that let you tackle one or another level. It let you explore out, get keys from beating fortresses that let you open doors that made shortcuts through the map or unlocked the next area.

The map is also alive, there were hammer brothers pacing back and forth that you’d need to face off against in a 2D level if you ever touched them. Bridges open and close. There are even toad houses with random items, a matching mini game and even white toad houses with super special items. If you didn’t get through the airship stage, the airship would fly off to a different location. You can even go down pipes into a 2D area and come out at another side of the map as a shortcut. These are all details that bring life to the map.

Each land has more than a hand full of levels. These levels offer a big variety. Everything from standard stages, to levels that forcibly scroll the screen to the right. Others are swimming and others have water that rises and lowers. Some levels are completely in the air while others are confined under ground. Its all to keep your interest by keeping things fresh. Since every land has its own theme, you’ll be fighting quick sand in desert levels, climbing towers to the sky, hopping over lava pits and sliding all over ice.

For the most part the game has a good sense of discovery. Like with Super Mario Bros 1, you’ll discover power ups inside of question mark blocks and you’ll bash through bricks. There are new blocks though, wooden blocks that can’t be smashed through, but you can bounce into some to release a power up. Donut blocks that wiggle then fall when you stand on them. Even ice that melts when fire touches it. There are even blocks to pick up and throw around. All of these new elements help to make the game feel fresh and new.

While every level is completely different, a few things stay the same. The pipes can take you to secret underground rooms and that’s part of the fun of the game. While the object is to make it to the end of each level, its really the sense of exploration that keeps you in each level. You’ll find vines to climb up, runways to fly, and even P-blocks that when you stomp on them, they turn coins into blocks and blocks into coins. This can completely change a level and even open up doorways. There are even new warp whistles that will take you to distant lands.

The familiar power ups are all back. You have a super mushroom that transforms a standard Mario into super Mario that makes him twice as tall, but that’s okay since he can duck under things. Fire flowers are also back that let him throw a bouncing fireball to fry enemies. Also returning is a star man, that lets Mario become temporarily invincible and he doesn’t just jump as he plows through enemies, he flips too. New to the series is the raccoon leaf. Catching the floating leaf gives Mario a tail that he can use with the B button to swipe at enemies or knock through blocks. He can also get a running start and when his meter fills up, he can take flight for a short amount of time. Its an easy and fun mechanic that lets you explore or stay out of harms way.

Also new to the series are a set of three suits. A frog suit for easy swimming, but its not that good on land, because it hops everywhere. A takooni suit that not only gives Mario the same powers as a racoon tail, but he can also hold down and B to become temporarily invincible. Finally, there’s the hammer brother suit which finally gives Mario an equalizer, because it lets him throw hammers like the challenging hammer brothers. He can also duck to become fireproof. On top of that, there’s a P-wing that grants Mario instant flight. On the map, Mario can also find and use items before he enters a level. This is a chance to make a tough level much easier, because each power up is just an extra hit of damage for Mario to take.

At the end of most levels, there’s a sort of slot machine. A single slot with three different cards rotating inside. You only get one card per level, but if you get three of the same card you’ll get 1-Ups depending on if its all mushrooms, all star men, or all fire flowers. The star men are worth five extra lives. If you fail getting all three in a row, you still get an extra life. Its a nice touch that keeps you going in the game. There are unlimited continues, but if you run out of lives, you’ll need to restart the land over again from scratch.

Here I am talking about Mario, when Luigi is a co star, but in Super Mario Bros 3, it takes things back to where they began with the original Mario Bros. That game is in this game as a competitive sort of versus mode where you compete. You can bop the other player to get a card to fall out of him. Its a good way to get cards that the other one doesn’t have to ensure that you get three cards in a row.

There are more enemies than ever before. Like always, you’ll take them out for the most part by hopping on them. Simple goombas flatten when you land on them, but others like the koopa have a shell that when you hop on them, they hide, allowing you to pick up their shell and boot it to send it zooming forward. Those two are time tested classics, but there are new enemies like fire spitting piranah plants, spiked ball throwing lizards and even old enemies like spines and buzzy beetles have learned a new trick. They can now climb on the ceiling and fall off to attack you!

The levels feel brief when compared to later Mario games, but they’re still very fun. When its all said and done, this game has memorable levels, enemies and bosses. Fun power ups, simple yet challenging gameplay. Good graphics for the time and a diverse set of foes. Everything is smooth, there are secrets and elements of exploration that put the cherry on the sundae that is Super Mario Bros 3. Everyone and their kids should still play this game.