Back in the early 90s, the WWF introduced its very first King of the Ring pay-per-view that featured a one night, eight man tournament. Outside of the tournament, the Immortal Hulk Hogan had come back months earlier, recaptured the WWF heavyweight championship and was struggling against the mighty Yokozuna to keep the title. WWF King of the Ring for the Nintendo Entertainment System is the video game adaptation of that first annual tournament. It is a one-on-one wrestling, beat-em-up along the lines of Double Dragon if it had more moves, more playable characters and less enemies. 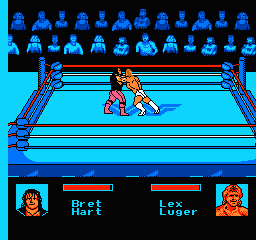 King of the Ring is the last WWF game for the NES and the graphics are good. You can tell which wrestler is which. The moves look like they are supposed to, unlike some other previous WWF games like Steel Cage Challenge. However, the gameplay is really lacking. There is no energy to the game, due to a lack of game modes and little reason to replay the game at all.

There are 10 wrestlers, Hulk Hogan, Bret Hart, Yokozuna, Bam Bam Bigelow, Razor Ramon, Lex Luger, the Undertaker, Mr Perfect, Shawn Michaels and Randy Savage (oooo yeah! dig it!!!). Each wrestler has their own stats in three categories, speed, strength and stamina. Wrestlers like Hulk Hogan Yokozuna have high strength. Others like Mr. Perfect and Razor Ramon have high speed, even if I’d disagree with that. You can even make your own wrestler, but its only customizing their stats. It was good to have the option to make your own wrestler, even if you can’t adjust his look.

All of these wrestlers have exact same moves! None of which have finishers, unless you do as I did as a kid, which is use a body slam for the Undertaker’s tombstone. The game also includes a customizable generic wrestler. Customizable as in the stats are updated, but not the look or the moves.

The gameplay as I mentioned isn’t good. It is a button masher. There are punches and kicks, then the grapple system that has you mashing buttons. You get in a grapple and you press B dozens of times in a tug of war sort of thing until you win and then you perform a body slam. Up+B = a suplex, Right+B = a hip toss. Expect to have blisters. Everyone has the same maneuvers, there are no signature moves that the superstars would use in their real matches.The 600 lbs Yokozuna can do a drop kick just like everyone else in the game.

As a kid, I would pretend to have finishers in the game. To apply Bret Hart’s sharpshooter submission, I’d always go to an opponent’s feet and pin them. Sure a pin isn’t a submission, but this game was just lacking the fine details. Lex Luger’s finisher was a running elbow, so to compensate for no actual running elbow, I’d have to have Lex Irish whip his opponent into the ropes, then bounce off the opposite set of ropes and meeting them in the middle, I’d have to have Lex do a drop kick. That’s what this game reduced me to.

For those that haven’t watched wrestling, you’ll pummel your opponent down, drain their energy with attacks and wrestling maneuvers. Then pin them for a three count to win the match. Your energy determines how many times you’ll have to mash buttons to stand back up once you’ve been put on the mat from a slam, suplex or a drop kick. When you’re on the ground, you’re vulnerable to stomps and high jumping elbow drops. If you’re going to pin someone, go for it immediately after you’ve knocked them down. When a wrestler has no health, they won’t get back up.

There are four major modes in the game: one-on-one, tag team, tournament and King of the Ring. Wait, King of the Ring is a tournament… Hmmm… It makes the game very dull with these limited modes and they’re all basically the same. Match after match.The tag team matches have your partner on the ring apron, but there are no sort of tag team attacks. Why would there be in a game that doesn’t even have superstar signature maneuvers?

Since this is a wrestling game, there is only a ring here. You can use the ropes to bounce off of when running, climb the turnbuckles, get out of the ring where a ten count then begins. There are just no frills, nothing interesting to differentiate one match to the next. No weapons, no back stage areas, no alternate rings or different arenas. Its just all so bland and simplistic. To top it off, the ring graphics and background just feel like an empty void. It is only the NES, but they could have done something to make the game feel more alive.

Playing this game as a kid was only inspiring to buy a SNES to get Royal Rumble, which came out at the same time. Its worth a play, but not much more than a play. Its just such a let down that a game this late into the Nintendo’s life span would be so basic.