Born in the arcade, Double Dragon is a classic belt scrolling beat’em up brawler. You play as Billy Lee as he fights through four missions and dozens of bad guys in order to rescue his girlfriend Marian. Its a plot that’s been done before, but Double Dragon was one of if not the first game that you get to see it happen. The NES version is no different, four thugs step right up to her, punch her in the stomach and carry her away while you’re busy in a garage doing stuff. 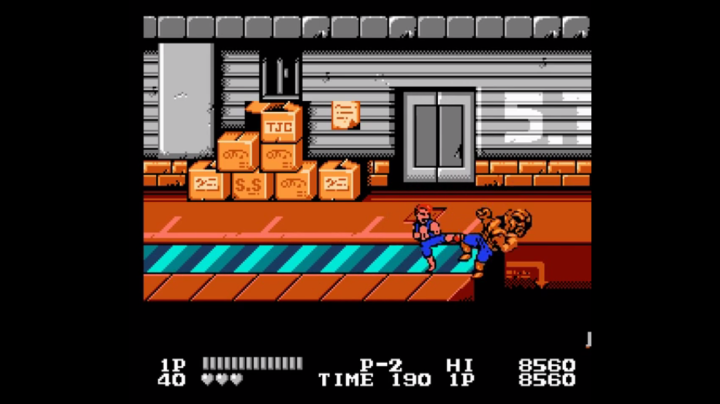 So then its off through the mean streets, a construction site, the woods and a fortress fighting against Shadow Warrior gang members. Fighting is smooth and easy, A button for punch, B for kick and pressing them both will make you jump. One of the things that makes the game different from the arcade is the need to level up in order to unlock new maneuvers. You’ll learn an uppercut to finish off a combo, a jump kick instead of your standard jump. Then from there it gets more complex, doubling over a foe can let you hair pull them, and then throw them over your shoulder. After that you can mount a downed opponent and beat in their face. Next its a devastating back elbow that’s probably the most effective move in the game. I use it to take everyone out. Last you’ve got a jumping roundhouse kick that healthy enemies will simply duck.

The NES version had different versions of the arcade and its all for the better. Extended and expanded levels, but they don’t bleed together like the arcade version. You’ll get to throw opponents off of buildings, knock foes off conveyer belts. It really emphasizes the funner parts of the arcade game. The later two missions bring new challenges to the table when they turn into 2D side scrolling brawler platformer hybrids. You’ll have to dodge falling stalagmites, jump over lava pits and climb the Shadow Warrior fortress, This new mix makes it more of an interesting game even if some people don’t like it for breaking away from its standard belt scrolling brawler.

You’ve got plenty of health, but no continues. If you run out of lives, that’s it, game over and you’ll need to restart from the beginning. In a way its still forgiving, because you get your health refilled when you beat a level. You can even fight with zero health.

The real tough part are the traps in the Shadow Warrior fortress. To kick off the fourth mission there are blocks that come out from the wall at random increments to bash you to death. Its unfair, it wastes health if not lives and that’s only the start. Everything else is perfectly fair, there are even exploits that let you leave the enemies behind to advance without beating them to a pulp.

You’ll find a lot of legendary glitches and exploits in Double Dragon. You can scroll up a wall toward the end of the first mission. Even score infinite points beating up an invisible enemy on the second level. At the end of the woods, if you don’t enter a cave, you can keep going and scroll the entire level to restart it over again.

There’s a limited, but memorable cast of enemies, Williams, Linda, Rowper and Chin, but the real star of the game is the giant Abobo. You’ll fight him on a conveyer belt, he’ll tear through rock walls and you’ll even fight two at a time of the big giants. It all leads up to a battle against Willy that carries a machine gun with him. That’s right you’ll take out a man with a machine gun using your bare hands! Oh but then he’s not the real boss, at the end of the arcade version, you’d take on the second player to determine who gets Marian’s love. Well since the NES game is limited to one player, you’ll get to fight a computer controlled Jimmy Lee at the end.

Each of the enemies can carry their own type of weapons. Linda can have a whip. Rowper can carry boxes, crates or barrels. Williams can have a deadly knife, barrel or dynamite. There’s even a glitch that creates some mystery weapon. The weapons add diversity, but you won’t get as many points for using them. Its best to keep with kicks and punches, but you’ll unlock all of the maneuvers by the time you enter the fourth mission.

With the limitations of the NES, the big giant characters of the arcade have turned into humble smaller versions, but they still look great. You can still see the detail and while the animations are limited to a frame or two, that’s all you need. One thing that is missing is the visual diversity of different colored clothes. Abobo seems to be the only enemy in game that changes color. You’ll get to see him turn into a green hulk later on.

Since the actual game is single player only, there’s a versus mode that pits you in a one-on-one match against the computer or another player. You select one of six characters, Billy, Rowper, Chin, Linda, Abobo or William then fight your doppelganger. The graphics here are much better, but only fighting yourself doesn’t have any sort of longevity. It could have been its own game and Double Dragon V would become a one-on-one fighter to the dismay of everyone. Three of the characters get a weapon, Rowper has a nightstick, Chin has nun-chucks and William has a knife. This gets interesting, because there’s only one weapon for two people.

One of the best parts of the game is the crazy upbeat and iconic music. Its some of the best from any video game and everyone will be humming tunes for the rest of their lives. Everything from the intro music to the last theme, its all unforgettable.