Double Dragon 2 was a huge leap up from its predecessor, but when it comes to the third installment of the beloved franchise, it doesn’t just stumble, but breaks its own legs even trying to walk. The goal is as it has always been, to save Marian from goons and thugs, because a new evil has risen to kidnap her… again! Its a typical plot and its never the plot that’s important, its all about the belt scrolling, beat’em up brawling action where you play as brothers Billy and Jimmy Lee in single player or two player cooperative action. 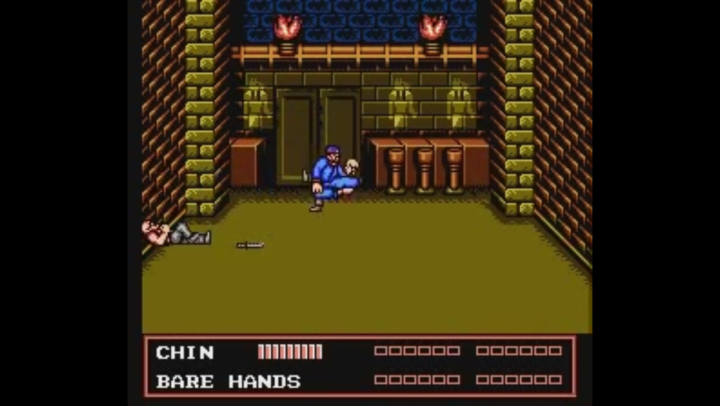 The game’s real gimmick here is fighting all over the world to save her. City to city, continent to continent and you might think that it must be a long game, but no its just the same brawling game with different environments. Double Dragon 2 had a diverse array of environments that let you know just how far you were traveling. You even take a helicopter to a fortress at some point, but in Double Dragon 3, you’re just at a new locale with no mention of how you got there.

On the plus side, the game does have cut scenes like the previous game, but they pale in comparison. It just feels like a lot less work went into them and they botch the spelling of one of their two protagonists. Two characters that have been in the series since its inception. Two characters that the player has always plays as. The Mario and Luigi, the Sonic and Tails or in this case the Billy and Jimmy Lee, but the game misspells it as Bimmy and Jimmy Lee..

There’s more of a story influence to the game as if a beat’em up needs more text to read through. You can tell a lot in a story without text or cut scenes, but Double Dragon 3 leaves nothing to your imagination. The information at the bottom of the screen is good, it shows your health and even what you’re attacking with. I would think that showing the weapon in your hand is a good enough indicator of what you’re holding. Again its all about telling you, rather than showing you. In a way that can still be a good thing, I’d have no idea that I was in the USA fighting without being told before a stage.

At some point, you get additional characters to play as that you can switch between via the pause menu. It does mix things up, and one even has throwing stars and a dash to change the pace, but for the most part they all feel and play the same.

Weapons can now break in the game and that does make sense, since you can keep weapons in a sort of inventory on the pause screen. You can switch between weapons, which is a nice, but unnecessary feature.

One notable thing is unless you’re in a room, you can now scroll the screen. In the past two games you were locked to an area until the game allowed you to progress with a blinking arrow of some sort. For the first time in the series, you can fight more than one type of enemy in an area.

The graphics are still an impressive part of the series with Double Dragon 3. The characters are smaller, but still larger than the original Double Dragon. Everything does look serviceable, there are details in the backgrounds that makes me think the real time went into the details rather than the technical things such as programming.

You’ll find a number of glitches and issues with this game, such as when you’re in the foreground and someone is in the background, they appear in the foreground over you. Perhaps that is so you can always tell where an enemy is, but since no other brawler does that, I will chalk it up to poor programming.

Speaking of poor programming, you only get one life. Oh sure, that’s true to the real world, you die and that’s it, but video games are typically synonymous with three lives. Some even have five.There could have even been an options menu that lets you select your lives or difficulty, but Double Dragon 3 knows what’s best. Its only a 30 minute game from start to finish, how many times will you die? The previous games had death traps, spikes, pits and falls that would murder you, but what about Double Dragon 3? There are a few necessary jumps and death pits, but its nothing as difficult as the previous games

To be fair, each character does have their own life bar, but some might find it too difficult to get to the second playable character. You also have your health restored between each country. I suppose you would get refreshed when you hop on a plane to go from China to Italy. Assuming they take a plane, you never actually see how they get there.

Another thing that I miss from the previous game is the diversity of the action outside of just brawling. It did a great job of mixing things up. Places that prevent you from jumping, death traps, convener belts, gears and so on. That was everything that made the previous game feel special, while Double Dragon 3 just feels like a generic, run of the mill beat’em up.

The enemies make the game feel generic. For the most part a lot of them have the same body types, moves and tactics. They feel more like reskins than individuals like the previous game. Of course there are a few unique enemies, such as ninjas that flip around off walls and throw stars at you.

The sacred stones gimmick lets the game star getting crazy. At some point, mummies start coming out of sarcophagus and that’s when the game takes a dive. I never saw Double Dragon for its cheese factor, but here you are, throwing ninja stars at mummies. Just when you’ve fought two mummies that took far too long to jump kick to death, you realize there’s still a third sarcophagus. I can see some craziness in Double Dragon 2 toward the final boss, you do fight your shadows, but in Double Dragon 3, you have a brawl with Cleopatra herself.

The music is fair, but its nothing memorable. The glaring thing is the sound effects that are taken straight from the previous games.

I see Double Dragon 3 as a big step down and a detriment to the franchise spotless legacy. The variety from the previous game is gone, the fun is gone, the challenge comes from one life rather than your skill.